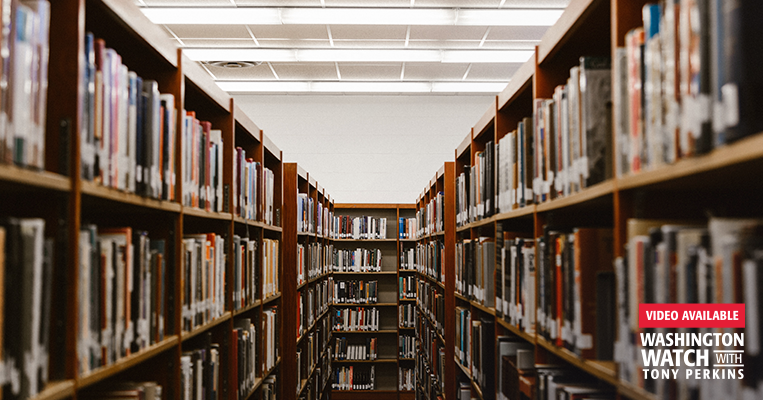 Books with graphic, sexually explicit content have been shelved in school libraries for years. Before social media, it was entirely up to individual parents to find this material and complain. Their complaints would sometimes result in the removal of one to two titles at one school (or perhaps on a good day, in a whole district). Other times, parents would find that the explicit book was defended on the grounds that it was "award-winning" or "inclusive." Now that parents can collaborate across state lines and share information, we can expect to see more actions taken by parents to defend children against pornography in the stacks of the school library.

Virginia mom Stacy Langton is fighting this battle in her school and school district. She explained recently on "Washington Watch," "The material itself is actually more shocking when you see it in person, and that was the entire reason why I had to show the images to the school board and read those passages aloud. And for me...as a Christian, I realized I have a duty here, before God. I found it almost impossible to ... stay silent in the face of this. And I felt that I had a duty and a moral obligation to let other parents know because I didn't know. I had no idea that there was something of this level ... in the school library. We're talking about children's souls that are at stake. And so that's why I took it to the school board meeting."

Langton's attempts to meet with her school's principal were met with dismissals and delays. When she finally did meet with the school principal, things didn't go as expected. Although a review process was started, the next communication she received from the principal was not about the review. Langton reported, "She called me on Thursday, and I was just thinking, 'Oh, she's probably calling to tell me something about maybe the update on the review process itself,' which they said would take 45 days. But no, she was calling to tell me that she had been informed that I had been in the library the week prior to check out another book and that I was not allowed to do that."

Instead of banning pornographic books from the school library, the school has banned the parent who found the books and alerted other parents.

How are certain books considered appropriate for teenage readers? Who makes those decisions? The American Library Association has tremendous influence in the process. Other interest groups advocating LGBTQ rights or comprehensive sexuality education produce "recommended book lists" or give awards to books with sexually explicit content. Publishers are also in on the game, launching sexually themed books for school-age readers in the name of diversity.

The solution to this problem is action. Parents need to draw attention to these books and make sure that the school removes them from their library shelves. Schools and libraries might try to blame parents for causing trouble. But the school systems that have purchased and promoted these materials must be held accountable, and pornographic content of any kind must be removed from school grounds.

If you think the job is too big, take heart from this example from Nebraska. When Nebraska Governor Pete Ricketts (R) warned parents about the comprehensive sexuality education being written into school health standards, parents got involved. They joined forces in a 20,000-member group called Protect Nebraska Children. This group effort led to action. Parents testified at public hearings. Comments from parents, grandparents, and other concerned citizens flooded the system. Parents filed FOIA requests, which revealed the contempt education bureaucrats felt for parents. Deborah Neary, a state board of education member, complained in one email, "Most of the testimony we have heard has been hate-speech -- not facts ...I hope they are not going to merely leave the decisions up to public testimony as you are asking our board to do."

Eventually, Nebraska parents managed to stall the process. According to reports, "The state education board suspended the standard draft process during a September meeting. It attributed the decision to concerns about the pandemic rather than public outcry."

As noted in our publication A Concerned Citizen's Guide to Engaging with Public Schools, much parental supervision is needed in our educational system today. From Virginia to Nebraska, we see examples of parents making a difference. We hold these parent leaders in prayer for their continued courage and fortitude. We pray for our nation, families, public officials, and schools, that all will take seriously the responsibility to protect children and that the right of parents to direct their children's education is held in the highest regard.

The Left Continues to Embrace Fear and Ignore Science