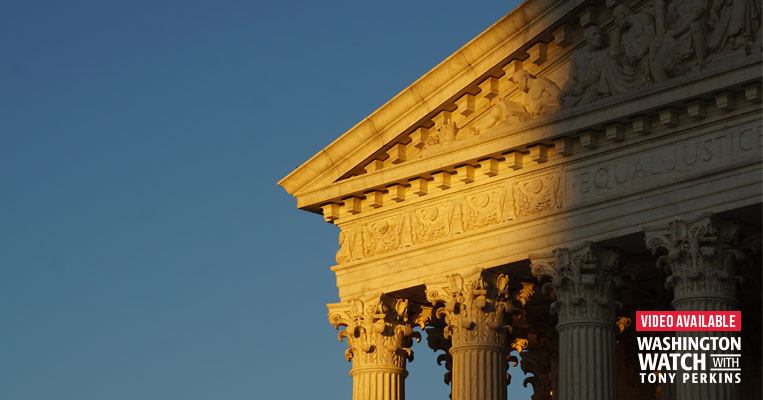 Since September, 9,300 More Hearts Are Beating in Texas

On Monday, pro-lifers around the country anxiously waited while the U.S. Supreme Court heard oral arguments regarding the Texas Heartbeat Act (SB 8), which restricts abortion after a heartbeat has been detected (and has been estimated to save the lives of 150 babies every day). In this case, the Court will not be ruling on the constitutionality of abortion. Instead, the Court is examining an underlying procedural enforcement matter, and whether the federal government can intervene to block a state law like this. Until the Court issues its verdict, the lifesaving law will remain in effect.

My three-and-a-half-month-old son, Joe, and I attended the rally held outside the Supreme Court yesterday, where I was honored to speak to the press. During my comments given while holding my son, I mentioned that in four countries across the world -- including the land of the free, the United States -- Joe could have been aborted up until the moment he was born. As I said this, Joe cried.

Certainly, Joe's response was more likely inspired by the need to nap than by my words, but those words should bring all of us to tears. Since the Roe v. Wade decision in 1973,over 62 million babies have been aborted. In its most recent report, the Centers for Disease Control (CDC) stated that in 2018 there were over 619,000 abortions in the United States (and this number, believe it or not, represents a victory for the pro-life movement, as it shows the abortion rate has fallen by 24.2 percent since 2009). As The New York Times admitted when it noted that the Texas Heartbeat Act was decreasing abortions by 50 percent, the massive increase in pro-life legislation throughout the states is undoubtedly contributing to the decline in the number of babies lost to the tragedy of abortion.

Next month, on December 1, pro-lifers will once again anxiously wait as the Court hears oral arguments in Dobbs v. Jackson Women's Health Organization. This case concerns Mississippi's Gestational Age Act, which prohibits elective abortion after 15 weeks -- nine weeks before the 24-week "point of viability" (i.e., the gestational age when a baby is generally considered capable of surviving outside the mother's womb). Unlike the case heard yesterday, the Dobbs case will evaluate a direct legal challenge to Roe; currently, under the jurisprudence of Roe and Casey, state legislation restricting abortion before the point of viability has been deemed unconstitutional, but Mississippi hopes to change that.

Like the people of Texas, the people of Mississippi want to prevent the abortion industry from preying upon unborn children in the womb. The Gestational Age Act received bipartisan support from both the Texas House and the Senate and was passed by an overwhelming majority. All around the country, state legislatures increasingly dissatisfied with Roe are working to pass pro-life legislation to protect unborn children in their state. These efforts have signaled to the Supreme Court that Roe must be re-examined.

In light of pro-life legislation making its way to the U.S. Supreme Court, statewide efforts to protect the unborn cannot slow down. If the Dobbs case overturns Roe, jurisdiction over abortion legislation would likely return to the states, so it is essential that the states are equipped with pro-life legislators to pass laws banning abortion. If the Dobbs case does not overturn Roe, state legislators must find creative ways to protect the unborn -- their lives are too precious not to do so.

Regardless of how the Court rules on the issues being argued yesterday, states will need to continue their pro-life work. It is estimated that in the two months that the Texas Heartbeat Act has been in effect, over 9,000 babies' lives have been saved. Pray that in the coming months, more states will be inspired by the efforts of Texas and Mississippi and pass legislation protecting unborn children. Pray that one day every American child has the chance to cry like my little Joe.

**Please stay tuned for a special upcoming prayer event, as FRC and many others link arms to Pray Together for Life during the evening of November 28, at 7:00 PM Central Time, at New Horizon Church in Jackson, Mississippi. Whether in-person or watching online, we hope you will join us. We look forward to sharing more with you about this important gathering in the days to come.**

Out of the Lockdown and into the Fired