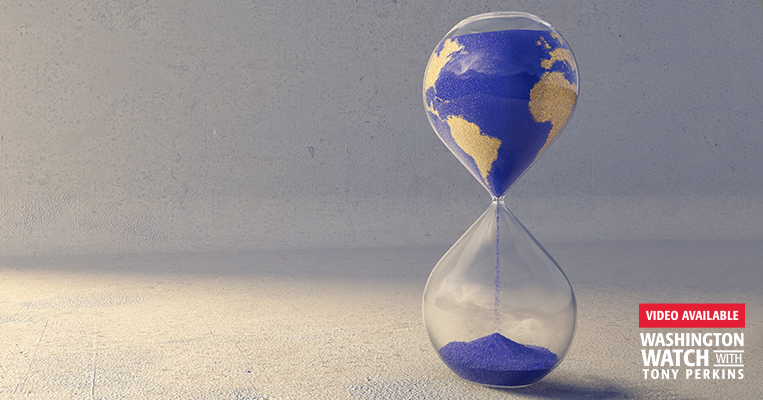 A Biblical Perspective on Climate Change

Last week, President Joe Biden visited New York to survey the devastation from Hurricane Ida. During his press conference, the president referenced a recent U.N. report that tracks climate change. According to the report, "Global surface temperature has increased faster since 1970 than in any other 50-year period over a least the last 2,000 years." Not surprisingly, Biden used his remarks as an opportunity to advocate for expansive, big-government climate policies, claiming that worsening weather patterns merit a wide-ranging, government-led approach. Without a doubt, hurricanes, fires, and other extreme weather patterns are cause for concern. But how should Christians think about the climate? Yesterday, FRC President Tony Perkins addressed the topic on Washington Watch, offering his perspective on how Christians should approach debates over climate change.

According to Tony, President Biden is correct to note that the climate is changing. Extreme weather patterns are becoming stronger and more frequent. But unlike many in the broader culture who have become gripped with fear about the weather, Christians should approach the topic with a perspective informed by Scripture. And while it may surprise those unfamiliar with the Bible, God's Word offers insight into how we should think about extreme weather.

First, Christians ought to remember the Bible's teaching about creation. Genesis 1-2 teaches that God created the heavens and earth. The material creation -- including mountains, oceans, deserts, and prairies -- were created "ex nihilo," meaning they were created out of nothing. In short, God spoke, and creation appeared. The doctrine of creation reminds Christians that God is the creator and has control over His creation. Furthermore, Paul explains in Colossians 1: 16-17, "For by him all things were created, in heaven and on earth, visible and invisible, whether thrones or dominions or rulers or authorities -- all things were created through him and for him. And he is before all things, and in him all things hold together." Christians understand that God is the creator and sustainer of the world. This understanding undergirds a Christian perspective on the climate. Ultimately, God is in control of everything that happens in the world, and nothing occurs without His knowledge and permission.

Second, in Matthew 24, Jesus tells His disciples about events and changes that will occur as the end of time draws near. Specifically, Jesus mentions great storms and natural disasters, noting, "For nation will rise against nation, and kingdom against kingdom, and there will be famines and earthquakes in various places" (Matthew 24:7). From Jesus' explanation, we can draw an important conclusion, which is that while these changes are scary, we should not be alarmed. In fact, Jesus told His disciples that these events would occur so they would be sobered minded, not alarmist.

Third, it is important for Christians to recall that the Bible explains why natural disasters happen in the first place. In short, all evil and suffering can be traced to the fall of humanity into sin (Genesis 3). Man's rebellion against God not only resulted in humanity's spiritual and physical death but had implications for creation as well. As Romans 8:22 explains, "For we know that the whole creation has been groaning together in the pains of childbirth until now." Sin not only affects humanity, but the whole of creation, and sin is ultimately behind the evil that ravages our lives.

Considering the wide-ranging effects of sin, Tony made an important point, noting:

Man is responsible for the changing climate. Our sin has corrupted the environment. It began in the Garden of Eden with the fall of man and the climate as only gotten worse ever since. But the solution is not bigger government that will take more of your money and more of your freedoms and promise more things that they cannot deliver on.

Significantly, climate change, natural disasters, war, famine, poverty, and civil unrest are part of living in a fallen world. Christians should care about these issues and do whatever is in their power to push back against the corroding effects of sin -- wherever they appear. But followers of Jesus should not expect the government to be able to provide all the solutions and hand over their freedoms for a false sense of security. In fact, Christians need to be wary of those who want to use issues like the changing climate to take away freedoms and impose policies that will have harmful and unintended consequences.

Christians should not forget that God is the one who calms the storms and is Lord over the elements. As Tony reminded Washington Watch listeners,

If you and I take the warning that Jesus has given us, not to scare us but to prepare us for what is unfolding in the times in which we live, we will be better prepared to face them and to minister through them so that others might come to know the truth of the Gospel of Jesus Christ and be free from their sin and experience life abundantly.

Ultimately, Jesus warned us that things would get difficult in the final days. But even as circumstances and events become more challenging, believers have an opportunity to point others to the hope of the gospel. While maintaining a posture of trust toward God and refusing to panic or surrender our basic rights, Christians can encourage others and strengthen our faith as we trust in Christ who is the same yesterday, today, and forever (Hebrews 13:8).

The Protest of Future Past
NEXT