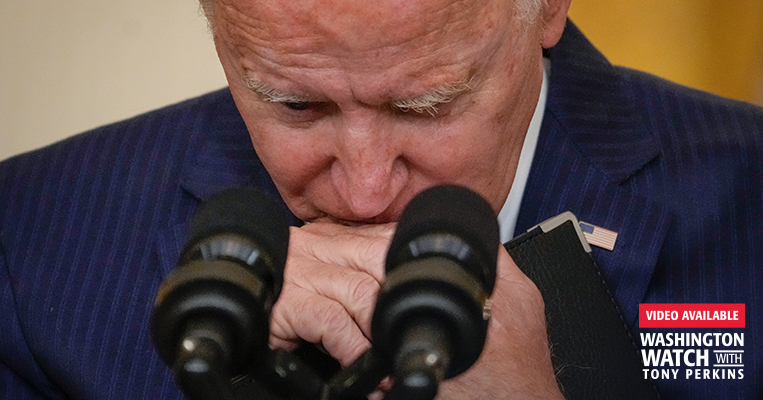 It must have been a relief for the White House to put Joe Biden on a plane to New Jersey Tuesday. For the first time in weeks, the president got to talk about a disaster he didn't create. And yet, while he surveyed the wreckage from Hurricane Ida, the world's attention was still 6,900 miles away on the damage that can't be undone: Biden's disastrous exit from Afghanistan.

"Every time I don't think this situation can get any worse," Congressman Michael Waltz (R-Fla.) shook his head, "it does." Not even a year into his term, the cries for Biden's resignation are growing with every horrifying headline out of Kabul. Rattled by images of their president, hunched over his podium like a beaten man, Americans are struggling to make sense of any administration that would leave its own people behind. And yet, leaders from both parties warn, that's exactly what's happening. Even now, six planes sit idle on a tarmac in northern Afghanistan, hostages to Biden's weakness.

And what is the State Department's big concern? Not that passport-holding Americans are held prisoner by terrorists, but that the new Taliban government isn't "inclusive" enough. According to a State Department spokesman, the White House's chief complaint is not that Islamic extremists are preventing U.S. citizens from leaving, but that their new terrorist leadership group has "no women." What a perfect snapshot of this administration's priorities! In a deadly crisis with U.S. lives on the line, the only thing Biden cares about is gender politics.

Of course, here's the sick irony. If this White House was actually concerned about women, they'd have never pulled out of Afghanistan in the first place. Just this week, girls were being beaten and clubbed for showing even a flicker of resistance against the Taliban. Desperate to hold on to some scrap of the freedom our 20-year presence won them, they're risking whips, tear gas, and gunfire to demand what our president just threw away: the ability of Afghan women to work, play sports, study, and participate in society.

Meanwhile, as the president and his team are busy negotiating with these terrorists, private citizens are being forced to do the job Biden refuses to -- rescue stranded Americans. While groups like Chad Robichaux's Mighty Oaks Foundation scramble to cover the costs of planes and security, members of Congress are working just as frantically to get families out. "Like everybody else in the world," Rep. Ronny Jackson (R-Texas) said, his constituents "didn't know that Biden was just going to yank everybody out of Afghanistan and yank all the troops out and let the Taliban take over the entire country in a matter of hours, and then they were going to be stranded there."

In a harrowing interview on "Washington Watch," Jackson explained his shock that a mom and her three children from his district were trapped in the country. The Navy rear admiral-turned-congressman started ringing the phones off the hook at the State Department -- to no avail. Finally, without any help from the Biden administration, he decided to launch an emergency mission to get the family out. Even with military contractors on the ground, they hit roadblocks at every turn. At one point, he says, the Taliban at the airport "eventually stuck a gun to the mother's [temple] and told her that if she came back, they would shoot her in the head. They didn't care who she was or what kind of passport she had. She wasn't passing through." They were barely 200 feet from the gate, Jackson said, "and we could not get the State Department to open the gate and let them in. This is the kind of stuff that's happening. They were right there. [And yet], the State Department was making a lot of noise, saying they were trying to be helpful to U.S. citizens, but they were actually doing nothing -- nothing -- to help them."

In the meantime, Cory Mills, the military veteran who led the extraction, had to move the family from safe house to safe house just to keep them from being killed. Finally, deciding the airports were too dangerous, he decided to take the family out of Afghanistan by land. After some terrifying twists and turns, they made it. "Cory and his team are brave patriots," Jackson raved. "Praise God that American veterans have more resolve than Joe Biden or his State Department."

Hours later, you can imagine everyone's surprise when the president's team -- the same ones blocking them at every turn -- swooped in to take credit, insisting that the "U.S. has facilitated the safe departure of four U.S. citizens by overland route from Afghanistan." Are you kidding me, Jackson fumed. "This article makes me want to puke!" he posted, linking to the comments. "The State Department didn't do a d**n thing for these people for 12 days except almost get them killed repeatedly." Obviously, he said, they "didn't want the success story from Afghanistan to be that patriotic American citizens are going over there and doing something that the military wouldn't or couldn't do."

Democrats, who can't jump ship on this disaster fast enough, have been equally vicious in their criticism of the president. Sen. Richard Blumenthal (D-Conn.) said publicly that he's been working around the clock to get American citizens and Afghan allies home -- no thanks to Joe Biden. "I have been deeply frustrated -- even furious -- at our government," he vented.

Now, making matters worse for Biden's flailing PR crew, even his past failures are coming back to haunt him. Turns out, four of the five Guantanamo prisoners that Biden's old boss released in exchange for disgraced U.S. Army Sergeant Bowe Bergdahl are taking choice seats in the Taliban's new government. On Obama and Biden's watch, even the so-called "mastermind of the regime change" was freed. They returned the favor, releasing "thousands of prisoners near Bagram airfield, including high-value... al Qaeda fighters."

At the time, several people, including FRC's own Lt. General (Ret.) Jerry Boykin, saw the decision for the ticking time bomb it was. He predicted way back in 2014: "...[W]e have traded for a guy that is guilty of a crime that is actually punishable by death, we traded him for five of the worst Taliban leaders in Guantanamo, two of which are mass murderers, all of which will be back on the battlefield and all of which will be threats -- not only to Americans there but to the Afghan people -- because before we got there, they were killing Afghans in brutal ways."

Now, seven years later, terrorists are wearing our uniforms, hoisting our weapons, and mocking our heroes. Americans look on, filled with regret for Biden's choices -- and theirs. Before Afghanistan collapsed, 21 percent of the country said they'd take back their vote for this president if they could. But unfortunately, elections have consequences -- the gravest of which, we pray, are not yet to come.

A Biblical Perspective on Climate Change
NEXT

Abortion Activists Slow on the Draw