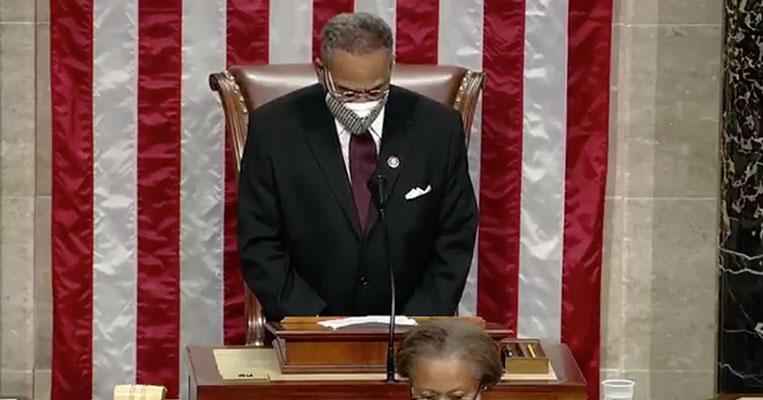 Awoman's Place Is in the House?

House Democrats sure didn't waste any time sparking controversy. The 117th Congress had barely been gaveled in when Rep. Emanuel Cleaver (D-Mo.) decided to stir the pot with a "prayer" that has several Americans wondering what, exactly, our country is in for under this leadership. In a word, the Washington Times warned: godlessness.

Maybe Cleaver was trying to be clever, but when he ended his invocation by saying "Amen and Awoman," few were amused. His attempt at "inclusivity," as Democrats called it later, was highly offensive -- especially as Republicans prepare to duke it out over Speaker Nancy Pelosi's (D-Calif.) new "gender-neutral House rules." In her proposal, words like "mother and father," "son and daughter," and "aunt and uncle" would be forbidden -- an attempt, she claims, to "honor all gender identities." Whether Cleaver was trying to lay the groundwork for Pelosi's agenda or not, his "woke" prayer created more fury than the unity Democrats promised.

"It shows you how out of touch the Democrats in the House are," Rep. Jim Hagedorn (R-Minn.) fumed. "They are so fixated on 'degenderizing' everything they even take it to prayers, and to a word that has nothing to do with gender." He's right. "Amen" comes from the Hebrew word that means "so be it." Surely a Methodist minister like Cleaver learned that on his way to a Master's of Divinity?

But as nonsensical as the prayer's signoff was, "awoman" wasn't even the most horrifying part. In the truly problematic portion of his invocation, Cleaver actually invoked the names of multiple deities, including Hindu's Brahma. "We ask it in the name of the monotheistic God, Brahma, and 'god' known by many names by many different faiths." Brahma gets mentioned by name, while Jehovah is simply called "the monotheistic God" that Cleaver lumps together with other monotheistic gods like Allah. Frankly, it's an insult -- not just to America's religious community, but to our Judeo-Christian heritage as a nation.

"Scripture teaches that prayer should be addressed to the triune God of the Old and New Testament," FRC's David Closson points out. "Christians should recognize that prayer offered to another deity is a form of false worship. But Cleaver's theologically muddled prayer is a good reflection of much of what passes for Christianity today and a reminder that those serious about the gospel have much work to do."

Of course, this isn't the Left's first swipe at God (2012 Democratic National Platform, anyone?), and it won't be the last. But the notion that prayer is something that can be scoffed or diluted on the floor of one of the world's most powerful institutions is a step too far. "Praying to a bunch of gods, so as to include all believers, all faiths, even non-believers and atheists and pagans, is not the way to secure our country's walk on a godly course..." Cheryl Chumley chides. "That this prayer came from the mouth of a Methodist preacher makes the offense all the worse. Shouldn't he know better?" Worse, she writes, "Take out the Judeo-Christian faith from America's founding, and you take out the idea that rights come from God, not government. You remove the foundation upon which America was built -- upon which American Exceptionalism is based."

In the end, that's exactly what the Left wants -- an end to exceptionalism, truth, and any moral authority that stands in the way of their agenda. But if Democrats keep pushing the issue, trying to remake America in their godless image, watch out. The message voters sent in House races last November will only get louder.

The Light of the World: Hope and Healing for a Hurting World