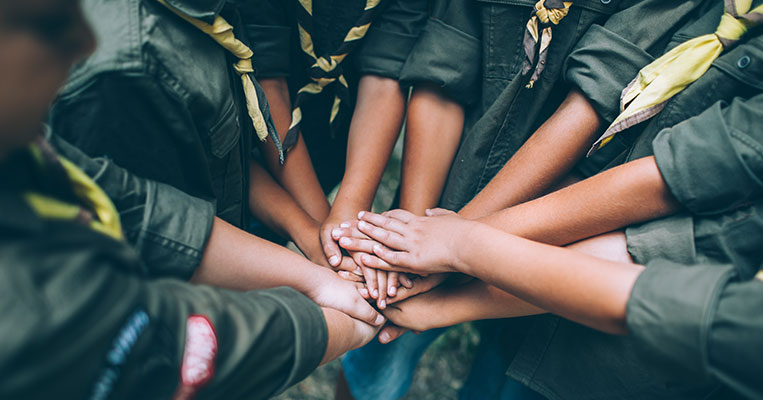 Justice Amy Barrett made history Sunday when she was sworn in as the first mother of school-age children (seven of them!) to serve on the U.S. Supreme Court. She is the fifth woman ever to sit on the court. The Girl Scouts among others, tweeted congratulations in recognition of Justice Barrett's accomplishments for the female sex.

But then, the Girl Scouts deleted their tweet. The organization tried to explain: "Earlier today, we shared a post highlighting the five women who have been appointed to the Supreme Court. It was quickly viewed as a political and partisan statement which was not our intent and we have removed the post.... Girl Scouts of the USA is a nonpolitical, nonpartisan organization. We are neither red nor blue, but Girl Scout GREEN. We are here to lift up girls and women."

In March 2019, the Girl Scouts tweeted praise for the four female justices who had served; apparently they only consider Justice Barrett partisan. Despite the fact that her colleagues and former professors (across the political aisle) have nothing but the highest praise for Justice Amy Barrett, and despite the total lack of disqualifying reasons, evidently Justice Barrett is considered too partisan.

Here are some people the Girl Scouts deem to be sufficiently non-political and non-partisan to associate with: Alexandra Ocasio-Cortez, Michelle Obama, Jill Biden, Ruth Bader Ginsburg, and Andrew Cuomo.

The Girl Scouts have also worked with organizations like Planned Parenthood and Teen Vogue to promote abortion, and they will admit biological males as "brownies." They sponsored a "no adults allowed" event at the U.N., where young girls could pick up a Planned Parenthood brochure called "Healthy, Happy, and Hot," which advised girls it was up to them whether to have sex if drunk or high, and that it was their "right" to hide a positive HIV status from sexual partners.

Any sensible person would understand terms like "nonpolitical," "nonpartisan," and "neither red nor blue" to mean either abstaining from political causes altogether or remaining neutral between two sides. But while they embrace abortion advocacy, the Girl Scouts censor even pro-life T-shirts. And while they praise the late Ruth Bader Ginsburg, they deem Justice Barrett, a woman who is just as accomplished, too partisan.

The bottom line is that the Girl Scouts, like so many other Leftist organizations, no longer advocate for all women, but only those who fit their partisan political criteria. It isn't that Amy Barrett or any other woman is too partisan, but that the Girl Scouts have become too liberal.

The Girl Scouts are one more example of a once-proud institution that brought Americans together which has been captured and destroyed by the radical Left. Given the Girl Scouts' recent track record, their retraction of praise for Justice Barrett is as unsurprising as their claim to be "non-partisan" is dishonest.

That's why so many Americans, particularly Christians, are abandoning the Girl Scouts in droves, for alternatives like American Heritage Girls, which instills girls with virtues, not progressive indoctrination.

The truth is, Justice Amy Coney Barrett, professor, judge, and mother of seven, has excelled in one of the most demanding professions in America. Her nomination and confirmation should be a story of inspiration to every young girl.

** Also, don't miss the rebroadcast of Freedom Sunday 2020, airing on the Daystar network this Saturday, October 31 at 7:00 a.m. and 7:00 p.m. I guarantee it'll be an encouragement to you in these rocky days before the election. **

Biden Fizzles while Pennsylvania Burns
NEXT