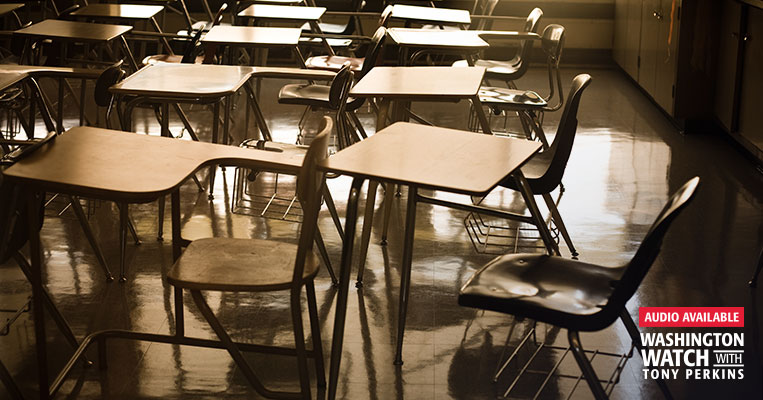 "The school districts won't come clean. They'll dress it up in buzzwords and euphemisms. And when you see this stuff, it's really shocking. It's stuff that almost no one in the country believes." Investigative reporter Luke Rosiak described on Washington Watch the tactics local officials use to keep parents in the dark about the radical agenda being pushed across America's 13,000 school districts. "You routinely see them using euphemisms and denying freedom of information requests, and a lot of times they'll just delete stuff when it's embarrassing."

Sixty years ago, school district battles focused on the Left removing God from public schools. Thirty years ago, it was about what kids learned in sex ed. Today, it's about a radical indoctrination that is all encompassing.

In Rosiak's own school district of Fairfax County, Virginia, teachers were told in a training seminar, "white supremacy includes the worship of the written word and the trait of perfectionism." Rosiak translated the high-flown rhetoric, "so we had teachers telling kids not to try their hardest and not to learn to read."

Although the Fairfax County school board deleted that nonsense online after parents spoke up, Rosiak said the same people, with the same beliefs, are still in charge. Who knows what they're pushing behind the scenes?

Well, many parents have been finding out for the first time, as schools remain virtual in response to the coronavirus pandemic. Before Rosiak started to collect examples, he said he was "flooded" with "cries for help from parents who felt overwhelmed." He started a website, WhatAreTheyLearning.com, where parents can look up their school district, and share their own examples, as well as see what others have posted.

Two other developments have accompanied parents' increased awareness of what their children have been learning. First, many parents have opted out of the public school system. Second, some local governments, panicked by the results of their own strict lockdown policies, have resorted to unconstitutionally targeting private schools.

After promising to allow private schools to open earlier this summer, Oregon Governor Kate Brown threatened private schools which opened with 30 days jail time and a $1,250 fine, while granting waivers to public schools of the same size in the same county. Alliance Defending Freedom sued the governor on behalf of Hermiston Christian School, a small school that had already demonstrated it could meet health guidelines.

In another Washington Watch interview, ADF Senior Counsel David Cortman described the absurdity of the rule. "Corona has no idea whether a student is sitting in a chair in a public school or sitting in a chair in a private school." According to the ADF complaint, Oregon has even admitted "they feared [the opening of private schools] could cause a 'mass exodus' from public schools."

Government has targeted private schools before during the pandemic. Cortman summarized, "It's not about science. It's not about health. It's about favoritism."

Rosiak had a more sobering take. "School systems are probably the most important thing that the government does," he said. "We've got 60 million kids in the public schools and those are going to be future voters and future workers." And yet our school districts are pushing "some of the most radical stuff in America right now."

Parents are on the front lines of this new front in the culture war, and they need to know what they're up against. More importantly, they need to take a stand. Demanding transparency is a great place to start. So is running for school board. The solution to this crisis won't come from Washington, but from the courage of men and women of faith all across our nation.

The Transgender Craze: 'The Permanent Medicalization of a Whole Generation of Children'
NEXT