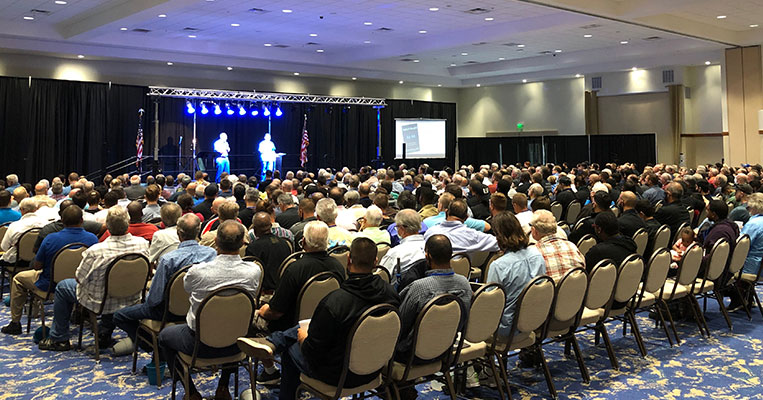 Men Standing up to the Cancel Culture!

You can't say Wikipedia didn't warn us. Last month, co-founder Larry Sanger had a blunt message for users: the site's neutrality policy was "dead." Then, he went on to prove it -- decreeing that volunteer editors can no longer describe themselves as believers in natural marriage on their profiles, because it's too "discriminatory." Apparently, it isn't just social media picking sides anymore.

In a culture that's rapidly descended into a forced silence through censorship, men must stand courageous on the truth and for the truth in the face of this cancel culture. The good news is that it's happening. The curtain is being pulled back, and men are beginning to realize they are the target of the Left -- but it's their children and grandchildren that are the prize liberals seek.

Undaunted by the unrelenting cultural attacks of the Left on manhood, a group of 500 men gathered this past weekend in Port St. Lucie, Florida to take a stand. Men of all ages, from young boys to senior saints, were part of this inspiring Stand Courageous Men's Conference. And in a day of racial divide and discord, the unity of Christian brothers amidst various ethnicities was clearly manifest. Truly, what unites us in Christ is stronger than anything that can divide us.

What makes the Stand Courageous men's events so powerful? First, our leadership team prays for the right place and the right time for each event. The "Macedonian Call" story told in Acts 16:6-10 is a model utilized in planning these events. The Lord knows where men are hungry for God and who want to grow into mighty men of faith, loving husbands, present fathers, and humble servant-leaders in the local church and community. Port St. Lucie, Florida was one of these places.

Second, local pastors are on the front lines of ministry as men respond to the compelling messages of the day. On Saturday, many men came to faith in Christ in tears of repentance and confession. Others rededicated themselves to the Lord after failures and heartbreak. When Lt. Gen. (Ret.) Jerry Boykin gave the altar for anyone to accept Christ, he issued the challenge for someone to be first knowing that more would follow. Once again, the Lord moved on the heart of one courageous man, followed by many more who believed and were saved. Local pastors where there to meet the lost wanting to be found with arms of love to embrace these new brothers in faith.

Third, the highlight of every Stand Courageous event is the "Father's Blessing." While the Left works relentlessly to destroy the spiritual identity of men, the "Father's Blessing" reinforces the love of Father God through affirmation and confirmation. Amidst the chaotic voice of the world trying to shame men into silence, the act of one man conferring God's blessing on to another elevates the spiritual mantle of man's leadership in the home, church, and community. On Saturday, it all started with fathers blessing their own sons. After, anyone who had not received the "Father's Blessing," was asked to come down front where they would receive the blessing from another faith leader. For these men, pastors filled in as proxy for many fathers who had never blessed their sons. At the end, men left the conference as champions ready to fight the good fight of faith.

The roaring sound of Stand Courageous events are drowning out the voices of the world as evidenced by changed lives, renewed commitments, and outspoken courage for biblical truth. FRC looks forward to sounding the charge again in the near future.

A Christian Response to Biden's Remarks on 'Trans' Children
NEXT

Farewell to a Fixture of the D.C. Community...