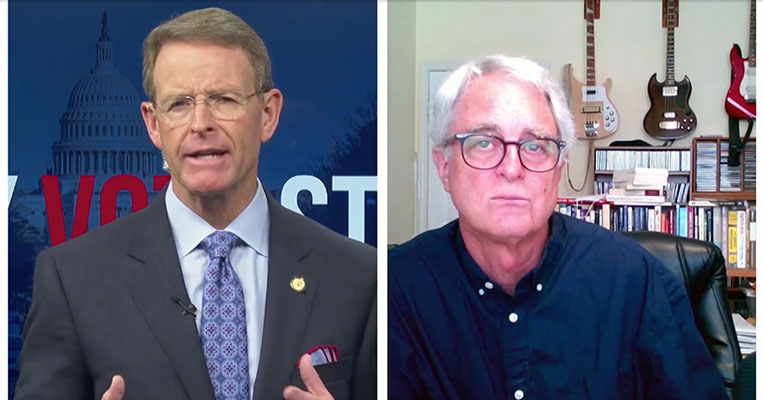 How Should Christians View 2020?

What if the problems tearing our nation apart right now are not truly about racism, police brutality, or equality? What if the central problem we face is not a physical one, but a spiritual one?

In the introduction to the third episode of FRC's Pray Vote Stand 2020 broadcast series, FRC President Tony Perkins made this sobering observation: "America is approaching this moment from a position of real spiritual weakness."

Only six percent of the country has a biblical worldview, down from 12 percent 25 years ago. What's more, 58 percent of adults (including 23 percent of Christians) believe that moral truth is up to the individual to decide.

So what can we as committed believers do to influence America when we only make up six percent of the population? It turns out we can do a lot. As we've seen across human history, God only needs a committed remnant to change the world.

It's this committed and believing remnant that can and must spread the biblical worldview in this critical election season. George Barna, FRC's new Senior Research Fellow for Christian Ethics and Biblical Worldview, laid out the stakes of this election plainly: "The 2020 election is not about personalities, parties, or even politics. It is an election to determine the dominant worldview in America." As Barna has learned from his decades of experience interviewing tens of thousands of people, our worldview directs our attitudes and actions. "When you look at every major issue that's involved in this election, it has a worldview connection. When we look at how people are going to vote, really they are going to vote their worldview."

It's clear that in order to get our country back on track, more people need to hold to and live out a biblical worldview. This has to start in the home. As one man from Virginia asked during the program, how can parents make sure their children grow up with a biblical worldview? Barna made it clear what has to take priority for parents: "The Bible teaches that a parent's most significant job in life is to raise up their children to be spiritual champions -- people who know God, love his word, and live according to it." How? " They need to look at what influences the worldview of their children and recognize that [developing a] worldview starts at 15-18 months of age and is almost fully formed by the age of 13." Barna pointed to media, public school education, and church youth education as some of the most influential forces on kids. One disturbing statistic that illustrates this is the fact that the typical American teenager has been exposed to over 32,000 hours of media by age 18. At the end of the day, Barna observed, parents need to know "what impacts our children and be very careful about what we allow them to be exposed to in those arenas."

It's obvious that Christian's won't get a biblical perspective on the most pressing issues of our day from secular culture. That's where FRC's Director of Christian Ethics and Biblical Worldview David Closson comes in. The goal of FRC's Biblical Worldview Series, which he authored, is to "help Christians and pastors think through these major issues that we are debating in the public square from a specifically biblical perspective." As Closson pointed out during the webcast, there are some issues that all people of good faith can have differences of opinion on, but there are foundational issues such as life, human sexuality, and religious freedom that the Bible speaks clearly to. "At the end of the day ... there's such a thing as objective truth. It's important to funnel whatever the issue is through the lens of God's word."

Passing on biblical principles doesn't just affect our families and church communities, it ultimately effects all of society. The lack of biblical principles only leads to chaos, as Kenosha resident and business owner Scott Carpenter learned all too well. His family furniture business was destroyed by fire during the riots in Kenosha. "As a Christian, I had to find forgiveness in my heart for what happened and in order for my heart to heal and move forward," Carpenter said during the webcast. Incredibly, he is using the tragedy he has experienced to witness to Christ. He replaced the melted sign in front of his burned business with one that says, "No Jesus, No Peace. Know Jesus, Know Peace." "God can take a riot and turn it into a revival," Carpenter said. "This has God's hand all over it."

Pastor Jack Hibbs of Calvary Chapel Chino Hills in California closed the program with a stirring message of courage in the face of tribulation: "This is our time to stand for Christ and to exhibit glorious exploits for the kingdom of God... it's our time to be courageous, it's our time to stand strong, and it's our time to make history... This is a glorious moment not to shrink back but to step up. No matter how our nation goes physically, the way it goes spiritually -- that's on our watch."

A Gulf of Division
NEXT