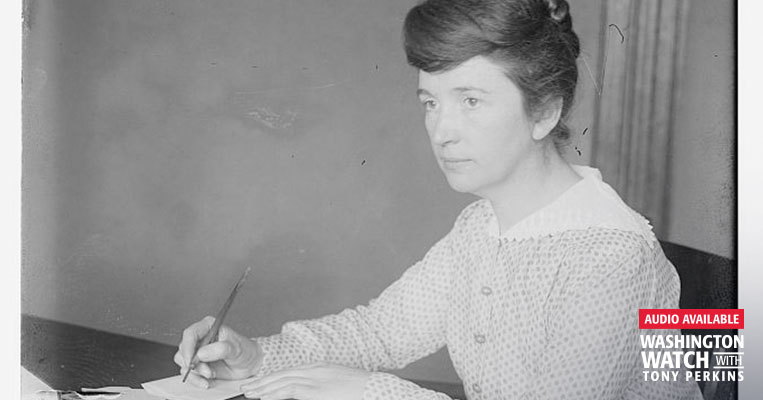 Two weeks ago, while statues were being roped down and schools were racing to change their "offensive" namesakes, Alexandria Desanctis wondered, "How long will Margaret Sanger last?" Surely, in the rush to erase the racists, the founder of Planned Parenthood was at the top of someone's list. "She was, after all, a foremost proponent of the eugenics movement -- motivated by her particular animus toward poor non-whites." Now, after more than 100 years of defending that legacy, at least one New York location has had enough.

It had been a long time coming. Just last month, Alexandria points out, 350 current and former staffers of Planned Parenthood had written the Greater New York chapter a letter condemning Sanger's "institutionalized racism." "We know that Planned Parenthood has a history and a present steeped in white supremacy and we, the staff, are motivated to do the difficult work needed to improve," the letter added.

Either in response to the internal pressure -- or the culture's -- Manhattan's branch conceded. "The removal of Margaret Sanger's name from our building is both a necessary and overdue step to reckon with our legacy and acknowledge Planned Parenthood's contributions to historical reproductive harm within communities of color," said the chair of Planned Parenthood of Greater New York's board.

Of course, as far as most people are concerned, Sanger's name is easy to change. A business model that preys on minority women isn't. In New York City, statistics will tell you, the most dangerous place for a black baby is in the womb. The Planned Parenthood abortion centers there -- conveniently located in minority neighborhoods -- make sure more African-American children are killed than born in the city every year.

And it's not just New York City. As many as 80 percent of the group's abortion facilities across the country are in minority neighborhoods, FRC's Dean Nelson pointed out on "Washington Watch." "And so, even if they acknowledge [Sanger's past], they still have yet to really acknowledge that their vision of what they are still trying to do is part of [her] original eugenics plan." When the business started closing down some of its locations in places like Hershey, Pennsylvania, it wasn't because they were scaling back. It's because they wanted to put that money in larger urban areas where their target market lives.

"Surgical abortion facilities are in black and brown neighborhoods," Dean said. It's a fact. "And you can even see that for yourself on Google Maps. So I think to me the evidence is undisputable. Whether they will acknowledge that or not is yet to be seen."

If you want to tear down the legacy of someone who doesn't represent American values, cancel Sanger. But don't stop until the work that's done in her name at Planned Parenthood topples along with her.

A Biden Bid with Sanders Substance
NEXT