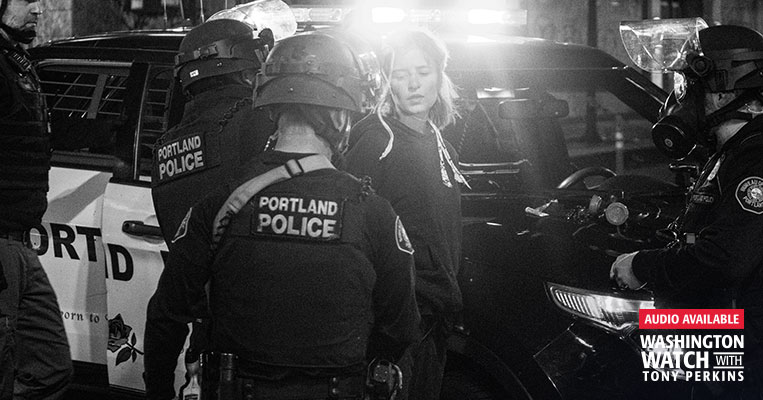 They aren't your typical weapons -- pool noodles, hockey sticks, umbrellas, and cigarette lighters -- but thanks to some gutless local officials, they're all the Portland rioters need to paralyze the whole city. For 55 consecutive nights, a collection of pathetic politicians has watched the throngs burn, loot, and smash their way through the town. And what is the media's biggest story? That President Trump, the only person who seems to care if the city becomes a pile of flaming rubble, is supposedly creating a "constitutional crisis" by being the one adult in the room willing to address it.

To call them a mob is a misnomer. They're an angry group of goons, all right, but there aren't enough of them to overwhelm a city. Unless, of course, you have the misfortune of living in one run by Leftists, whose inaction is doing just as much to destroy communities as the looters themselves. They're acting, Michael Goodwin points out, like lawbreakers are the new protected class. And if they aren't careful, he warns, they're going to hand the president four more years. Why? Because mayors like Ted Wheeler (D) are willing to flush their cities down the drain to protect a fanatic fringe who don't represent the real America at all.

"The blue-state pols are not just playing with fire on their home turfs, they're playing with the fears of voters across the country. You don't have to live in one of those burning cities to be afraid that your town will be next." It's one thing to support the protestors' cause while maintaining a sense of order. "It's quite another when officials in Portland, Seattle, Atlanta, Chicago, and nearly every other city basically throw up their hands at the criminal element, then blast Trump for wanting to solve the problem."

If city leaders are going to yawn while criminals tear down fences and set federal buildings on fire, the president isn't just empowered to intervene -- he has a responsibility to intervene. If Oregon leaders don't like it, FRC's Ken Blackwell said, tell them to stop coddling the mobs and do something about them. "Our elected officials cannot stand on the sidelines," the former mayor insisted. "And if they do, in American history, there are moments when life and property have been at risk and been destroyed, that higher levels of government have had to secure these the safety of our streets and our neighborhoods." That's what the president warned he would do in his executive order on protecting U.S. property -- and that's what he's doing by deploying federal agents.

And what has the state of Oregon done? Sued. "They're not wanted here," Mayor Wheeler said. "We want them to leave." At Trump and Acting DHS Secretary Chad Wolf, he had the audacity to point the finger: "You are escalating an already challenging situation." Instantly, the Wall Street Journal's William McGurn noticed, "the Portland story has become all about President Trump and the federal officers -- and not the violence and the city's failure to stop it." Suddenly, liberal politicians, the same ones who didn't waste a second putting a woman behind bars for cutting hair, can't be bothered to stop actual criminals when real lives are at risk. Even when their cities, as Ken points out, look more like war zones in Iraq than a U.S. tourist destination. But try to sing in church or hold an outdoor service and these Democratic governors and mayors will be on your doorstep faster than you can say "lockdown."

"It's not lack of resources that keeps such mayors from maintaining order," McGurn is quick to point out. "It's a lack of will." Look at Chicago, where the death toll keeps climbing, and Mayor Lori Lightfoot's (D) response. With a straight face, she looked at her press pool and said it's President Trump who's "terrorizing" the city. After a night that killed another 15 in a drive-by shooting, she didn't condemn the violence -- she condemned the White House for sending troops to keep her neighborhoods safe.

"The mayor of Chicago," Ken shook his head, "is... willing to let the slaughter continue." She blames race, when the reality is, "95 percent of these folks," he went on, "are being killed by other people of color, other blacks. She's basically saying that's okay [as long as] we can create enough chaos and enough fear that people will vote Donald Trump out of office. And I think she's going to be surprised. I think people are basically going to say, 'enough is enough,' and... [kick these co-conspirators] out of office for dereliction of duty."

The Democratic Party is running on a platform of lawlessness, hoping the American people will be stupid enough to believe it's "justice." But voters are not fools, and anarchy is not leadership. And if the Left wants to test either of those theories this November, be our guest.