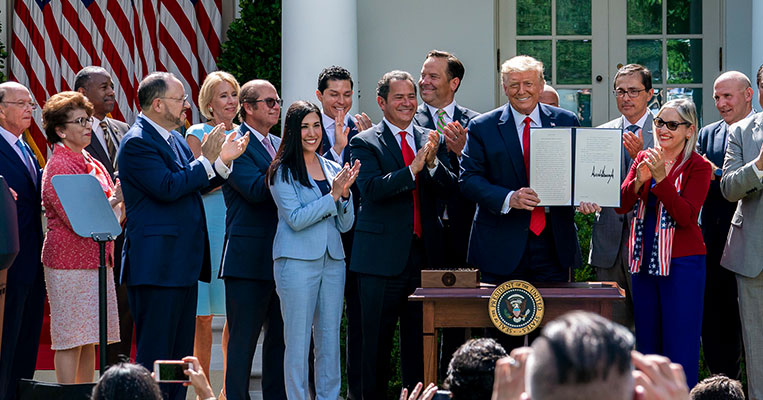 Goya Outrage Not Worth a Hill of Beans

It was the kind of program that, ordinarily, liberals would cheer. To hear them tell it, expanding the opportunities for minorities has always been their party's idea. But when President Trump took a stab at it, announcing a business and educational project aimed directly at Hispanic people, the Left wasn't about to cut him some slack. And worse than that, they're out to destroy anyone who does.

For Goya CEO Robert Unanue, Thursday's executive order had been a long time coming. Like most Hispanic Americans, he was eager to work with the administration to improve his community's way of life. When President Trump invited him to join his Hispanic Prosperity Initiative, he eagerly accepted. And, at the signing ceremony, he praised Trump, saying, "We are all truly blessed ... to have a leader like President Trump who is a builder. We have an incredible builder, and we pray. We pray for our leadership, our president."

No sooner had he spoken the words than the cancel culture, led by ring leaders like Rep. Alexandria Ocasio-Cortez (D-N.Y.), started the hashtag #BoycottGoya. To Unanue, who pointed out that he'd done an event at the White House with Michelle Obama too, the backlash was unbelievable.

"You're allowed to talk good or talk praise to one president but... you make a positive comment, all the sudden that's not acceptable," Unanue told Fox News. "If you're called by the president of the United States, you're going to say, 'No, I'm sorry, I'm busy, no thank you?' I didn't say that to the Obamas, and I didn't say that to President Trump."

Asked if he would apologize for the comments, Unanue said absolutely not. In fact, he made his feelings clear a liberal boycott was just another attempt at "suppression of speech." And he's right. These same people who claim to care about minorities -- phonies like AOC and her followers -- have never given two figs about real America. If they did, they'd have set aside their political agendas long enough to realize that Unanue is no enemy. They'd have seen that Goya -- the same company they've decided to blacklist -- just pledged to donate two million cans of food to needy U.S. families. And instead of applauding that -- or, frankly, just remaining silent -- they did what liberals do: proved they care more about politics than people.

The cancel culture is absolutely out of control. This is a man who simply said good about Trump, and what are the mobs doing? Threatening to take down his brand. We might as well be back in the French Revolution, lining people up in the guillotine yard. As Americans, we can't afford to be passive about this leftist revolutionary agenda. Fortunately, there are men of conviction like Robert Unanue who refuse to bend to the angry fringe. But there are far more, NRO's editors warn, "[who] believe they can pacify the mob by throwing it a sacrificial lamb or two. In that, they are mistaken." There is no appeasement. There is only courage or surrender. And only one will guarantee that our country and freedom survive.

Pro-Life America: On the Ropes with Approps
NEXT