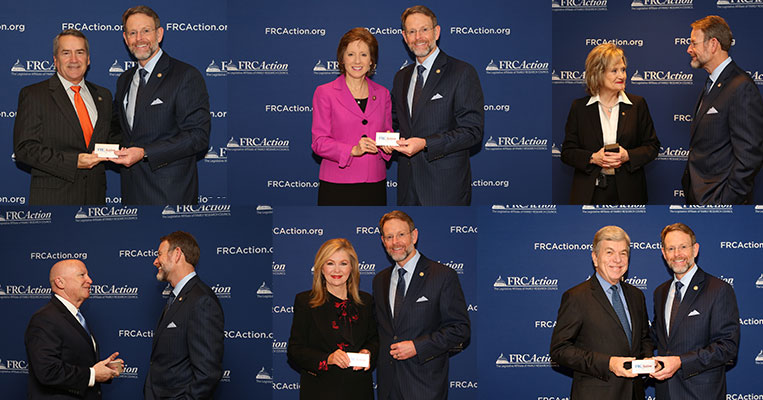 The Tried and True Blue

Since 1992, FRC Action has served as your effectual, distinctly Christian voice in our nation's capital. Being that voice involves alerting members of Congress to good and bad legislation affecting our faith, our families, and our freedoms. We help you hold your elected representatives accountable by scoring how they vote. At the end of each year, we publish the results in our annual Scorecard so that Americans like you can make informed decisions regarding the individuals you choose to represent you. You can find the most recent Scorecard here.

Members of Congress who maintain a perfect score of 100 percent for the entire legislative year are presented FRC Action's True Blue Award in recognition of their unwavering commitment to pro-life, pro-family, and pro-freedom legislation. One hundred forty-one members of Congress -- 51 senators and 90 representatives -- qualified for the "True Blue" designation in 2019, the First Session of the 116th Congress.

The senators receiving this year's True Blue Award earned that distinction by voting in favor of the No Taxpayer Funding for Abortion Act, the Born-Alive Abortion Survivors Protection Act, and the nomination of Sarah Pitlyk to be U.S. District Judge for the Eastern District of Missouri, a solid pro-life originalist who previously litigated important religious freedom and abortion-related cases such as Burwell v. Hobby Lobby and Box v. Planned Parenthood of Indiana and Kentucky.

House members, on the other hand, had to earn their True Blue Award by standing their ground on a number of bills that were anti-religious freedom or sought cement bad policy concerning sexual orientation and gender identity. Most prominent among these bad bills was the Equality Act, an innocuous-sounding but incredibly misguided bill that would overhaul our federal civil rights framework to mandate special privileges for sexual orientation and gender identity.

The True Blue members also supported implementation of the Conscience Protection Rule, which provides protections for medical professionals who have moral or religious objections to providing certain procedures (such as abortions or physician-assisted suicide), and the Protect Life Rule, which rejects abortion as a viable method of family planning and prevents federal family planning funds from going to organizations that perform or promote abortions (like Planned Parenthood).

We encourage you to examine FRC Action's Vote Scorecard carefully and use the voting records to inform your 2020 voting decisions. We hope you are encouraged to know that so many members of Congress are willing to consistently stand up for faith, family, and freedom.

Conservative in Noem Only?
NEXT