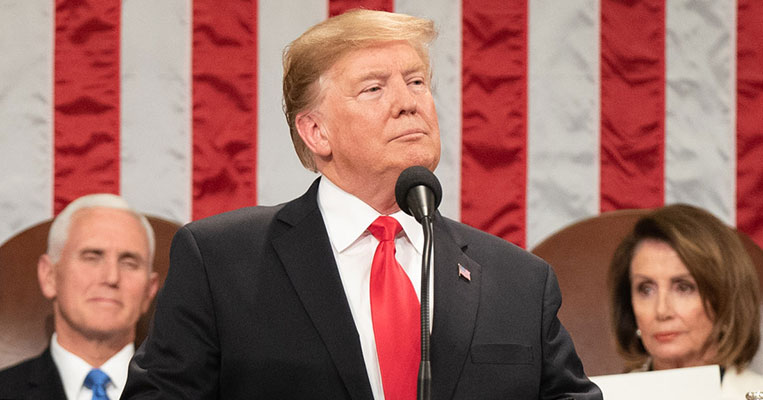 Trump Lets Her Rip at SOTU

It was not the speech of a man who'd endured months of political harassment. It wasn't the performance of a president "shamed and cowed by impeachment." It was the message of leader who's beaten the odds -- and, for three years, helped Americans do the same. Tuesday night's State of the Union was classic, confident, unconventional Trump -- a powerful reminder, in a chamber bent on his destruction, that this administration's successes are personal for every one of us.

From the military wife stunned by the return of her husband to the tearful parents holding a photo of Kayla Mueller, last night's speech was a trip through America's stories. We celebrated the miracle of Ellie Schneider's survival and cried with Army widow, Kelli Hake. We saluted an American treasure on his World War II promotion -- and rose to our feet when the hope of Venezuela united in our call for freedom. Together, they were the pages of Trump's first term, the illustrations of a three-year comeback Democrats tried glumly to ignore.

In a week where his opponents are still waiting for results, President Trump spent an hour and a half outlining his. "Jobs are booming, incomes are soaring, poverty is plummeting, crime is falling, confidence is surging, and our country is thriving and highly respected again. America's enemies are on the run, America's fortunes are on the rise, and America's future is blazing bright... [O]ur economy is the best it has ever been. Our military is completely rebuilt, with its power being unmatched anywhere in the world -- and it's not even close. Our borders are secure. Our families are flourishing. Our values are renewed. Our pride is restored. And for all of these reasons, I say to the people of our great country and to the members of Congress: The state of our Union is stronger than ever before."

For Democrats who couldn't even put together a successful caucus, CNN's Stephen Collinson argued, it was a "daunting warning." This president is an "effective, relentless political communicator." But more importantly, he pointed out, Trump has solidified his reputation as a "rare politician who keeps his promises." He's taken risks, Collinson insists, that other leaders would have spurned. And, to the horror of the Left, they've paid off. Despite impeachment, a hostile media, and a classless resistance movement, this president is enjoying his highest approval ratings yet. It's no wonder Speaker Nancy Pelosi (D-Calif.) finally lost it after sitting through his most compelling case for reelection yet.

When the speaker stood and ripped up a copy of the speech in disgust, her distress, Michael Goodwin writes, was somewhat "understandable." The speech was masterful, and she knew it. It was long, "because he had a long list of accomplishments to cite." Her only real weapon is "her personal hatred of the commander-in-chief. [And] it's not proving to be much of a fight. The president is on a winning streak... [and] the country has noticed. She has overplayed her hand... and led her party into another embarrassing dead end."

The unfortunate reality for Pelosi, Senator Lindsey Graham (R-S.C.) said later, is that she can rip up the speech, but she can't tear up the accomplishments. Things like protecting life, confirming judges, defending freedom, encouraging faith, and standing for the persecuted. "With every action," the president stressed, "my administration is restoring the rule of law and reasserting the culture of American freedom." In this country, he insisted, "We do not punish prayer. We do not tear down crosses. We do not ban symbols of faith. We do not muzzle preachers and pastors. In America, we celebrate faith. We cherish religion. We lift our voices in prayer, and we raise our sights to the Glory of God!"

A God, the president pointed out later, who creates us in His image. Looking up at Ellie in the galley, a sweet, yawning two-year-old, the president marveled that she had been born prematurely at 21 weeks and survived. It was a seamless reminder, as Mollie Hemmingway noted, that "children like Ellie are born at a time when it's legal to kill them in utero." Ellie, the president said, like every child, "is a miracle of God... That is why I'm also calling upon members of Congress here tonight to pass legislation finally banning the late-term abortion of babies. Whether we are Republican, Democrat, or independent, surely we must all agree that every human life is a sacred gift from God."

It was a poignant moment, one of many. And as much as others will try to distract or detract from what we saw, the people that matter went to bed last night believing what their president said was right. "Our spirit is still young, the sun is still rising, God's grace is still shining, and, my fellow Americans, the best is yet to come."

The Starbucks Stop Here
NEXT

Banks Mortgage away Kids for LGBT Cause