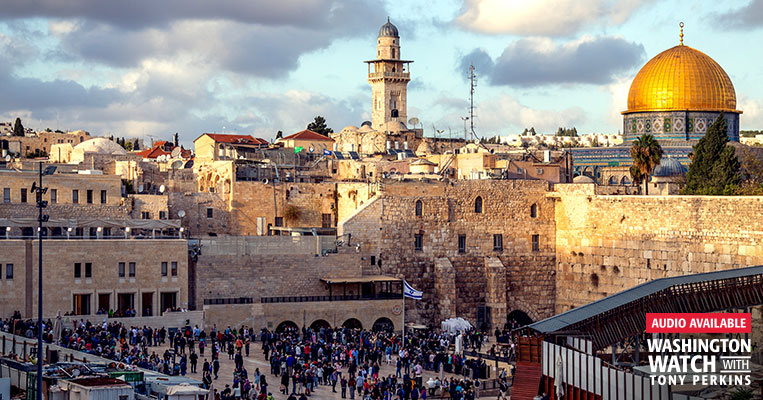 A Plan for Shalom in Israel

Yesterday, President Trump and Prime Minister Benjamin Netanyahu unveiled the long-awaited Middle East peace plan. The 180-page plan, officially titled "Peace to Prosperity: A Vision to Improve the Lives of the Palestinian and Israeli People" offers one of the most comprehensive attempts to broker a deal between the Israelis and Palestinians in decades.

As the president explained, "This vision for peace is fundamentally different from past proposals. In the past, even the most well-intentioned plans were light on factual details and heavy on conceptual frameworks."

While previous plans have failed because they did not adequately address Israel's security needs and/or failed to accommodate Palestinian aspirations for a sovereign state, President Trump's plan seeks to thread the needle by addressing Israel's military and security needs from border to border while providing for a future Palestinian state. Significantly, the president's plan calls for achieving mutual recognition of Israel as the nation-state of the Jewish people and the future State of Palestine as the nation-state of the Palestinian people. The president's plan is a realistic way forward for a managed peace between the Israelis and the Palestinians.

As part of the deal, if the Palestinians meet certain benchmarks such as renouncing terrorism, recognizing Israel's right to exist, and disarming Hamas (which is recognized by the United States and European Union as a terrorist organization), they will receive historic economic and political opportunities. The economic opportunities come in part through a massive investment of $50 billion (mostly coming from the Gulf states) which will spur the Palestinian economy. When implemented, the plan could create more than one million Palestinian jobs, double the Palestinian GDP, and reduce unemployment below 10 percent and cut the poverty rate in half.

Unfortunately, Palestinian leadership has so far indicated they are not interested in coming to the negotiating table. In one sense this is not surprising, given the ongoing disfunction within the Palestinian Authority. President Mahmoud Abbas, who has led the Palestinian Authority since 2005, has presided over a struggling economy and strained political situation since his election fifteen years ago.

However, as Chris Mitchell, the Middle East Bureau Chief for CBN News told me yesterday, there may still be hope for the peace plan if the Palestinian people signal to leadership they are tired of perpetually poor economic prospects and restricted travel rights due to the PLO's funding of terrorism. As Mitchell explained, many Palestinians are tired of living under a corrupt government and are ready for peace. This is why despite calls from Palestinian leadership for a "day of rage" in response to the peace plan, many Palestinians are evidently not going along. As Mitchell noted, "I have been hearing that some of the Palestinian people are not necessarily going to go along with this resistance against the plan."

Congressman Ted Yoho (R-Fla.), who joined me on Washington Watch yesterday as well to discuss the peace plan, pointed to the potential economic boon as a reason Palestinian leadership should consider the plan. "Everybody's going to win," Yoho argued.

President Trump himself stressed these economic benefits yesterday in a direct appeal to President Abbas: "President Abbas, I want you to know that if you choose the path to peace, America and many other countries -- we will be there. We will be there to help you in so many different ways, and we will be there every step of the way." He continued, "Your response to this historic opportunity will show the world to what extent you're ready to lead the Palestinian people to statehood."

While there are still aspects to be negotiated, the plan released yesterday by the White House once again displays the Trump administration's knack for tackling perplexing political problems. I commend the president and his team for crafting a win/win proposition; it would ensure security for Israel and enable an identity and economic prosperity for the Palestinians. Christians everywhere should pray for a cessation of hostilities between the Israelis and Palestinians and pray that everyone in the Holy Land may at last experience shalom.

A Stand for the Right to Pray