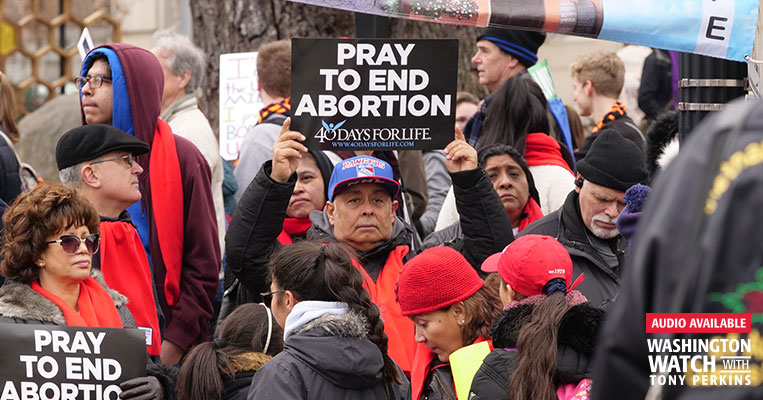 Life in the Administration

Last Friday, President Trump made history by becoming the first sitting U.S. president to speak in-person at the March for Life, the nation's largest gathering of pro-life supporters and advocates. Speaking before hundreds of thousands assembled on the National Mall, President Trump declared, "All of us here today understand an eternal truth: Every child is a precious and sacred gift from God. Together, we must protect, cherish, and defend the dignity and sanctity of every human life." Evoking imagery from Psalm 139:13, he continued, "When we see the image of a baby in the womb, we glimpse the majesty of God's creation."

The president's historic address is just the latest example of the administration's commitment to protecting children and limiting abortion. Thankfully, this commitment to life extends beyond just rhetoric. In fact, the Trump administration has taken significant action to advance the pro-life movement. For example, in President Trump's first week in office, he reinstated the Mexico City Policy to ensure that no taxpayer money would go to foreign non-governmental organizations that provide or actively promote abortion. However, as Secretary of State Mike Pompeo explained on Friday's edition of Washington Watch, the Trump administration not only reinstated the Reagan-era policy but expanded it to cover about $9 billion of federal aid.

This expansion was necessary, Secretary Pompeo said, because "There's always risk that when you provide resources to [foreign non-governmental organizations], they will sub-contract it, or they will flow that money to some other entity and thereby be able to certify that they didn't do it [use funds to promote abortion] but have enabled someone else to use those American dollars for that purpose. We've put in place programs and certification processes to prevent that from happening."

In addition to expanding the Mexico City Policy, the Trump administration has sought to limit abortion in other ways including introducing a new regulation through the Department of Health and Human Services (HHS) that prohibits recipients of Title X family planning funding from providing or referring patients for abortions (which effectively defunding Planned Parenthood of $60 million in annual revenue), calling on states to join a coalition of countries that seek to advocate against pro-abortion policies at the World Health Organization and the United Nations, and vowing to veto any legislation that weakens pro-life policies or that encourages the destruction of human life.

More evidence of the unprecedented commitment to the sanctity of life and religious freedom was seen at an event hosted by Family Research Council on Friday. Alex Azar, Secretary of HHS, announced that the Office of Civil Rights (OCR) at HHS will enforce the Weldon amendment (which prohibits federal funds from going to states that discriminate against any health care entity which does not pay for or provide coverage for abortions) by issuing a notice of violation against California for their mandate forcing every health insurance carrier to cover elective abortion.

The Trump administration's work against the culture of death represented by the abortion lobby is grounded in a biblical and moral worldview shared by America's founders. As Secretary Pompeo explained, "These are the fundamental rights that each human being is granted by our creator and who are enshrined in international human rights." Pompeo explained that these values guide him and his team at the State Department to protect the unborn wherever the United States government has a role. As Pompeo told me, "We have done our level best to make sure that no taxpayer dollar ever goes to fund an abortion. Abortion isn't a human right. In fact, it takes a human life."

The administration's stalwart defense for the human rights of all people stands in stark contrast to the values of the cultural left. Although ignoring the March for Life and continuing to oppose the human rights' of unborn children, Joe Biden found time over the weekend to conflate human rights with the far left's push to normalize transgender ideology, tweeting, "Let's be clear: Transgender equality is the civil rights issue of our time. There is no room for compromise when it comes to basic human rights."

The former vice president's "no room for compromise" comment is reminiscent of the heavy-handed approach taken by President Obama who often sought to use the State Department to export radical gender ideologies around the world (despite the offense this caused many of America's poorer allies). In fact, in 2015, under then-Secretary John Kerry, the State Department created a "Special Envoy for the Human Rights of LGBTI Persons." The sole job of the Special Envoy was to advance the agenda of far-left activists.

By contrast, the State Department under Secretary of State Mike Pompeo's leadership has focused on real human right's issues, holding the first-ever Ministerial to Advance Religious Freedom in 2018. Dozens of countries participated, and the United States along with others signed a statement condemning terrorism and the abuse of religious believers by non-state actors. At the 2019 Ministerial, the United States led a group of 46 countries to condemn attacks on places of worship.

Whether on abortion or their advocacy for human rights or religious freedom, the contrast between the two parties could not be starker. Over the weekend, NARAL's president, Ilyse Hogue, boasted on Twitter that she successfully lobbied for the 2016 Democratic platform to include the "strongest language in history" on abortion. Ominously, she added "And I am honored to be nominated for that committee again this cycle."

Going into November, American Christians will need to think carefully about how their faith informs their approach to elections and their responsibility to vote. Remembering that over 80 percent of the time politicians vote in line with their party platform, Christians need to take a close look at the party platforms (which will be released this summer) and understand how these platforms represent contrasting worldviews.

Making Sure "Never Again" Means Something