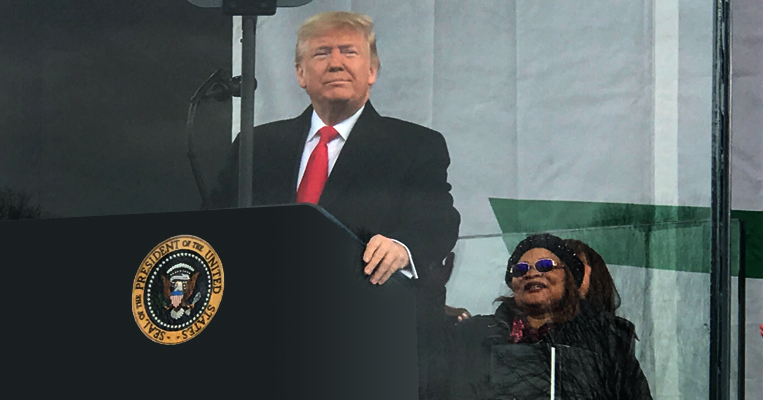 Life on the March

Since that horrible Monday in 1973 -- the day our Supreme Court signed the death warrant for millions of unborn children -- America has had four pro-life presidents. Not one of them appeared at a March for Life rally -- until today. When Donald Trump walked across the stage at the National Mall, in front of a sea of pro-lifers, he wasn't just making a statement. He was cementing a legacy.

"All of us here today," the president said, "understand an eternal truth: Every child is a precious and sacred gift from God. Together, we must protect, cherish and defend the dignity and the sanctity of every human life." These weren't the words of a man who simply speaks out for the unborn. They were the words of a man who's doing everything in his power to protect them. And that, many of us would argue, is what makes today so significant.

"For a long time," Kaylee McGhee wrote in the Washington Examiner, "it seemed that the pro-life movement's impact would be limited to the culture" -- which, she quickly adds, is "by no means insignificant." But now, she points out, Americans have a leader who is also "lending the credibility and authority of his office to the pro-life movement," not just in word but deed. Everything he said to the tens of thousands of pro-lifers today "won't be meaningless," she insists, "because he'll have the policies to back them up. This is long overdue. The pro-life movement is a just and noble cause that deserves more than empty promises. Finally, we have a president who understands that."

Thanks to Donald Trump, not even a Democratic House has stopped him from doing what he knows is right: protecting women and children from the greatest human rights crisis of our time. "They're coming after me," he told the crowd, "because I am fighting for you and we are fighting for those who have no voice." But "we will win," he promised, "because we know how to win..."

As if his presence at the March didn't create enough contrast with the Left, the president took time to remind Americans what pro-lifers are up against. "Democrats have embraced the most radical and extreme positions taken in this country for years..." he explained, with nearly every party member in Congress supporting "taxpayer-funded abortion all the way up until the moment of birth." But they're not only on the wrong side of history on the issue -- they're on the wrong side of the American people too. While they claim to represent women, the president said, "Millions of extraordinary women across America are using the power of their votes to fight for the right and all of their rights as given in the Declaration of Independence, the right to life."

"...[E]very human life born and unborn is made in the holy image of Almighty God. Together, we will defend this truth all across our magnificent land. We will set free the dreams of our people and with determined hope, we look forward to all of the blessings that will come from the beauty, talent, purpose, nobility, and grace of every American child."

To the raucous cheers of the masses, he walked off the stage -- leaving people to agree: "Unborn children have never had a stronger defender in the White House."

** If you missed FRC's 15th annual ProLifeCon Digital Action Summit, be sure to watch this important event, featuring HHS Secretary Alex Azar's announcement of an enforcement action issued to implement the pro-life Weldon Amendment, as well as White House official Jennie Lichter summarizing the administration's efforts to tighten fetal tissue regulations and other pro-life initiatives. Other highlights include the Human Coalition's Christopher Baggett discussing virtual clinics for women with unplanned pregnancies, a new online tool for them to obtain the services they need. Ryan and Bethany Bomberger also joined the event to announce The Radiance Foundation's new resources for children to learn about the pro-life cause. All of this and more, in the 2020 ProLifeCon archive below!

Standing Courageous in Carolina
NEXT