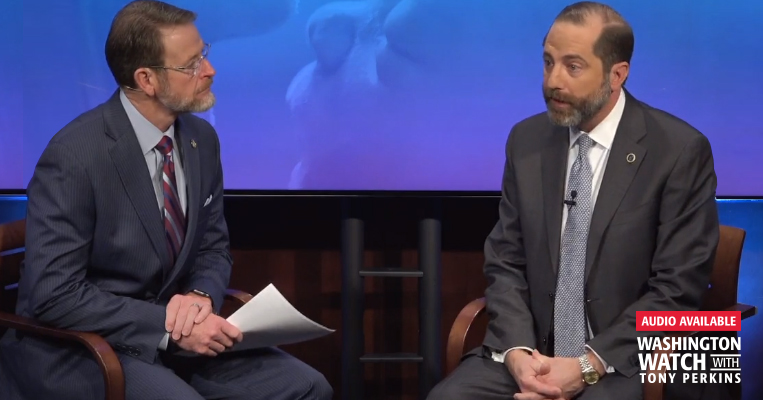 President Trump wasn't the only one making history at this year's March for Life. HHS Secretary Alex Azar put an even bigger exclamation point on the day when he broke news at FRC headquarters about new action the agency was taking. After four years of watching California attack its own people, HHS is finally saying, "Enough." If the state can't be bothered to follow the law, Secretary Azar has decided to make them pay for it -- in federal funds, if necessary.

It's been a problem since 2014. That's when California's health department started strong-arming employers into covering abortion on their insurance exchange. As bad as that was, the Golden State made it worse. Instead of exempting churches and other groups with religious convictions, the state ordered them to comply too -- forcing pastors like Calvary Chapel Chino Hills's Jack Hibbs to finance a deadly business in direct defiance of their faith!

Wait just a second, churches complained! That's a violation of federal law. Under the Weldon Amendment, health care entities can't be punished for refusing to cover abortion. Instead of reading the plain language of the law, the Obama's Office of Civil Rights waved off the accusations, insisting that California wasn't guilty of any wrongdoing. But the actual text of the amendment begs to differ. It says funds cannot be made available to governments (including states) that subject a health care entity (including health care plans) to discrimination on the basis that they do not provide coverage for abortion."

So, for years, churches like Calvary Chapel have been at the state legislature and in court, fighting not to pay for the killing of innocent unborn babies. When President Trump took office in 2017, HHS went to work enforcing the Weldon amendment. Today, after trying everything else to get California to comply, Secretary Azar's team issued a formal violation that could jeopardize millions of federal dollars that flow into the state.

"We've received complaints by religious entities, including a group of religious sisters from the Roman Catholic Church, including a Protestant church, that have been required by California to cover abortion as part of their insurance. We have sought diligently to remediate that... They have refused... And so as of this moment, I have issued a notice of violation to the state of California for their noncompliance with the Weldon amendment," he told the crowd at ProLifeCon.

HHS hopes, Azar said, that the notice will be enough to "spur them into action..." After all, conscience rights like these are already settled law. "The law is," as the secretary pointed out, "unambiguous." "We'll work to secure their compliance. And if they do not, we will refer this matter to each of the organizations at HHS that provide funding in any way to the state of California for appropriate action... California is a big consumer of HHS funds. We're giving them 30 days so that we don't have to cross that bridge."

This is at least the fourth time, FRC's Connor Semelsberger points out, that the Trump administration has issued notices of violation (two of them against California) through the Office of Civil Rights since taking office, showing just how seriously this administration views its role in protecting conscience rights for all Americans."

As Secretary Azar himself said, "We're a department that, like President Trump, is committed to protecting life from the moment of conception through natural death, which means, in my mind, we're the Department of Life." Like most Americans, this administration understands that abortion isn't health care. And we can think of no better way of celebrating the March for Life than making sure states know it!

Life on the March
NEXT