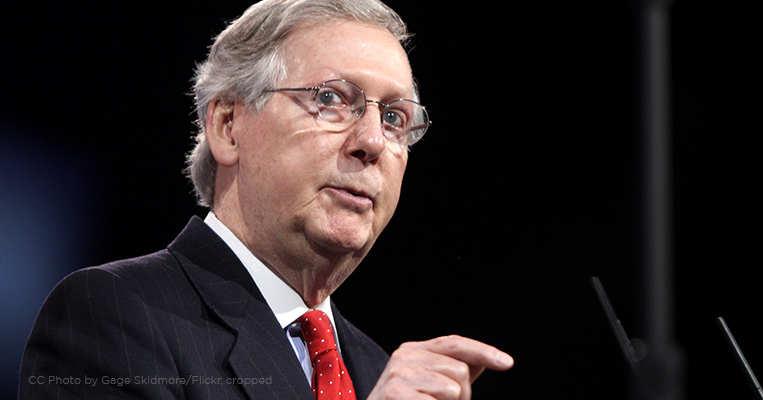 With the House's impeachment circus sucking most of the air out of Washington, it's easy to forget that there's other business taking place on the opposite side of the Capitol. While Speaker Nancy Pelosi (D-Calif.) is wasting her majority on the biggest witch hunt of the 21st Century, her Senate counterpart, Leader Mitch McConnell (R-Ky.), is a confirmation machine -- carefully stuffing the court's stockings with loads of qualified judges.

Most Americans can't help but be impressed with what Senate Republicans have done, but Thursday, it was what their leader said that turned heads. In a powerful and somewhat unexpected speech, McConnell took to the floor to decry what the Left is trying to do to religious liberty in America. Much like Attorney General William Barr, the Kentucky Republican decided it was time for a teachable moment, namely on why this freedom is so important.

"I want to take a moment to help clarify why I and millions of other Americans care so much about having federal judges who believe in the radical notion that words matter and that a judge's job is to follow the law and the Constitution," he started. "Take, for one example, the subject of religious freedom. The liberty of conscience and the freedom to live out our faiths has been a foundational principle from the Republic's earliest days. Many of the first Europeans who arrived in the New World came here fleeing religious persecution."

But, he insisted, "Let me contrast the understanding of the Founders, with a couple of current events. Last month, New York State convinced a district judge to throw out the Trump administration's conscience protection rule for health care providers." All that rule did, McConnell pointed out, was protect the right of doctors, nurses, and other health care workers from participating in procedures that violate their religious beliefs. Radical liberals can't stand that. They want to punish Christians and force them to do their bidding on abortion and gender transitions.

"New York's behavior is part of a disturbing trend. Powerful interests on the "Left want to shrink freedom of religion until it means 'freedom to go to church for an hour on Sundays as long as it doesn't impact the rest of your life.' That shrunken interpretation is nothing like what our Founders intended," McConnell insisted. "And, candidly, I'm not sure how much longer the modern Democratic Party will even believe in that."

Taking on the extremism of the far-Left, McConnell blasted the Democrats for wanting to take away churches' tax-exempt statuses or trying to impose religious litmus tests on nominees.

"Look -- these warning signs on religious freedom are popping up everywhere the modern political Left rears its head. Religious freedom in America has never meant, and will never mean, solely the freedom to worship privately. It has never meant, and will never mean, the ability to practice only a subset of faiths acceptable to some subset of politicians. It means the right to live your life according to the dictates of your faith and conscience -- free from government coercion."

"If those statements strike anybody in this chamber as remotely controversial, that is exactly why President Trump, Senate Republicans, and millions of Americans are focused on confirming federal judges who will apply our Constitution as it was originally understood."

Americans who care about the Constitution, freedom, and conscience owe a great deal to this administration and Senate Majority Leader Mitch McConnell. They've made balancing the courts a priority, but just as importantly, they've built a clear case for why protecting religious liberty matters. Not just on the bench -- but everywhere. Years from now, that will be the legacy that lasts.

Salvation Army Gets Ringing Endorsement from Trump
NEXT