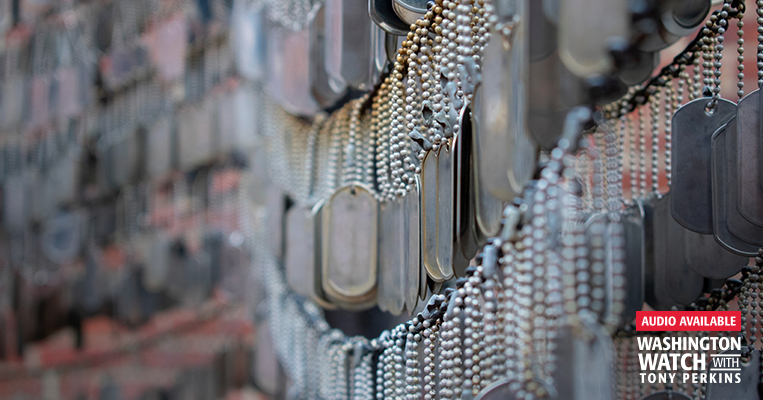 "It's not a piece of metal on a chain. It's honor and dignity and glory." -- Kenneth Davis, veteran

Nothing can ever bring back Cheryl Spivey's son. After three tours, he had the chance to stay home. But the dad of three and combat medic reenlisted anyway, because "he could help." On his fourth deployment, Tony died helping. Now, a group of angry activists want to take away one of the few comforts Cheryl has left: a set of dog tags reminding her to be strong.

"It blew my mind." That's the only thing Kenny Vaughan could say about it. When the Army's trademark office contacted him and ordered him to stop printing Bible verses on his products, he couldn't believe it. "They had asked us to do it," Kenny explained. For years, his company, Shields of Strength (SoS), had a good relationship with the Army -- and every service branch. Going back to Operation Iraqi Freedom, troops wore the special dog tags he made -- with the military's blessing. They were so meaningful to people like Army Ranger Russell Rippetoe that when he died, President George W. Bush even mentioned them at his funeral.

"Aside from the official insignias they wear," historian Stephen Mansfield points out, "a [the SoS dog tag] is the emblem most often carried by members of the military in Afghanistan and Iraq." Now, 20 years and five million dog tags later, the Army's suddenly decided it has a problem with the idea. Citing a complaint from the bitter secularists over at the Military Freedom from Religion Foundation, Paul Jensen, Director of the Army Trademark Licensing Program sent an email to Vaughn insisting on a dramatic change of course. "You are not authorized to put biblical verses on your Army products. For example Joshua 1:9. Please remove ALL biblical references from all of your Army products."

Now, to be clear: this is not being paid for by the government. This is not government money. It's simply a nonprofit using the trademark license approval it's been granted to print the Army emblem. So what grounds does MFRF have to say these can't be produced and voluntarily worn by our military? According to First Liberty Institute's Michael Berry, none.

"These are just uplifting, encouraging, inspirational verses," he told listeners on "Washington Watch." But he points out, Weinstein is "perpetually offended." Even though Kenny Vaughn makes and distributes a lot of these (more than two million, to be exact) out of his own pocket. "But apparently, according to Mikey [Weinstein], no good deed goes unpunished. And... Weinstein seems to think -- wrongly -- but [he] seems to think that it violates the Constitution, and that the Army should sue or take legal action..."

It's nothing more than a "publicity stunt," Berry argued. "Well, I guess it's more than a publicity stunt. It's a cowardly act, because Kenny Vaughn and I have met many service members -- and in many instances, gold star families who have lost loved ones in combat... And to them, these small tokens of faith and military service mean the world. And to deprive them or other families of the ability to have a small token of military service is just the deepest insult you can imagine."

Not to mention unconstitutional. In a letter to Jensen, First Liberty warns that if they press the issue they'll lose. "Clearly their motivation," Mike explained to me, "...was simply the fact that Mikey had generated some negative publicity and a little bit of heat on the Army. And they immediately raised the white flag and capitulated to that bully. And... enough is enough. When are people in the Department of Defense going to realize that the Constitution, the First Amendment, and federal law like the Religious Freedom Restoration Act have to mean something? Those don't stop at the Pentagon's front door."

Berry and the rest of First Liberty will do anything it takes to remind them. "We won't stop until they're allowed..." After all, Kenny points out, "the very freedom our soldiers fight for is at stake."

'The World Cannot Say It Didn't Know'
NEXT