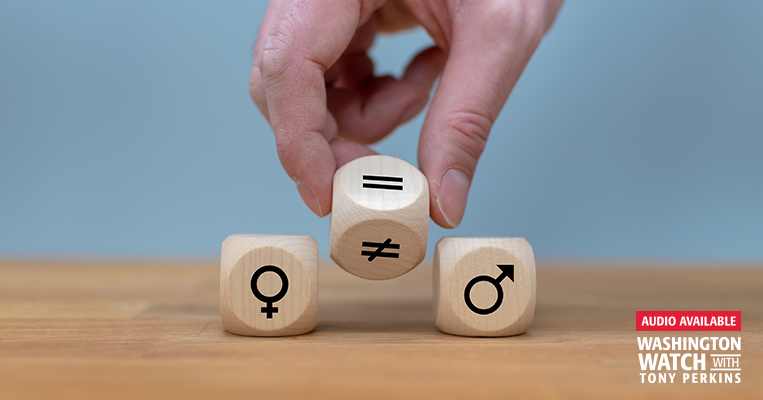 It may be the most dangerous bill no one's really talking about. But if becomes law -- this radical grab bag of social extremism -- all of America will live to regret it. Meet the Equal Rights Amendment (ERA). It's not just about women anymore. In fact, it's not really about women at all.

How much damage can 52 words do? Trust me, you don't want to find out. The House majority's new ERA may be short, but the list of consequences is never-ending. Liberals will say it's about equality, but what it's really about is a one-way ticket to everything on their social agenda wish list. Gender-neutral bathrooms? Check. Taxpayer-funded abortion? Check. Infanticide? Check. LGBT indoctrination at school? Check. Radical sex ed? Check. Transgender "rights?" Check. The elimination of women's sports? Check. It's no wonder the Democrats want to dust off the ERA. As far as they're concerned, the old push for women's rights is the perfect Trojan horse for everything else on their agenda.

Don't expect the Left to let that cat out of the bag. As far as House Democrats are concerned, this is about "women's rights." But what rights? It's 2019, FRC's Patrina Mosley pointed out on Wednesday's "Washington Watch." Women already have equal rights under the fifth and 14th Amendments. There are even laws in place to prohibit sex discrimination. So what is it the ERA would actually do?

For starters, it would wipe the slate clean of any state or national pro-life law, amending the Constitution to create a permanent right to abortion on demand -- right up until the moment of birth, paid for by American taxpayers. And, as we know from the last 11 months, "abortion," at least as far as the Left is concerned, includes leaving perfectly healthy unwanted newborns to die.

This is a smokescreen, Patrina warns, for establishing the most radical nationwide policy on abortion ever seen. Far more radical than Roe v. Wade -- and much more binding. Not that liberals will admit it. ERA Coalition co-President Jessica Neuwirth has told everyone who will listen that the proposal is "silent" on abortion. Well, the language may be silent, but abortion groups certainly aren't. "Both NARAL and Planned Parenthood have had lawsuits in the courts in the states, where they've said the ERA would be used to promote and perform abortions," Patrina countered. "It's already been used in Colorado. It's already been used in New Mexico."

And what about the word "sex?" How does the ERA define it? Simple: it doesn't. "They are intentionally ambiguous," Patrina explains. "The term 'sex' is not defined, so it can be interpreted it in any way you want. That has implications for women across the board... like allowing men -- not even men posing as women, but biological men-- to enter women's locker rooms, showers, facilities. It really opens up that can of worms that we've been fighting for so long. This would be that one quick fix that Democrats would have right in the Constitution to strip any protections a state or local government [has] against that."

Rep. Jerry Nadler (D-N.Y.) sure wasn't shy about that in Wednesday's mark-up, telling members that when they talk about "sex," Democrats mean sexual orientation and gender identity. But how close are Democrats, really, to advancing a bill that's been dead for 40 years? No one really knows. The Virginia legislature's flip to liberal control means that their effort to push a state ERA is back in business. They argue that if they pass it, they'll be the 38th -- and final -- state that's needed. But the deadline for ratification has come and gone -- not that Speaker Nancy Pelosi (D-Calif.) will let a thing like the rules get in the way.

Congressman Mike Johnson (R-La.) was as surprised as anyone when the chairman of the Subcommittee on the Constitution, Rep. Steve Cohen (D-Tenn.), pointed at Republicans and said, "You guys get so caught up in and in process. Process doesn't matter..." In other words, Mike said, "We're here to advance an agenda. We don't care what the rules say. We don't care what the Constitution says... That stuff's immaterial." Democrats, Cohen said, need to "look beyond the process, because we've got to advance this principle...' That's what we're up against. Right now, they're defying all of that in our constitutional tradition."

The rule of law matters, Johnson told Cohen. At least in the Trump-stocked courts, where this bill will surely end up if it becomes law. In the meantime, urge your representative to vote no on the ERA, which ought to stand for Expanding Radical Abortion.

Impeachment: Hearsay Can You See?
NEXT

In Order to Form an SPLC Union...