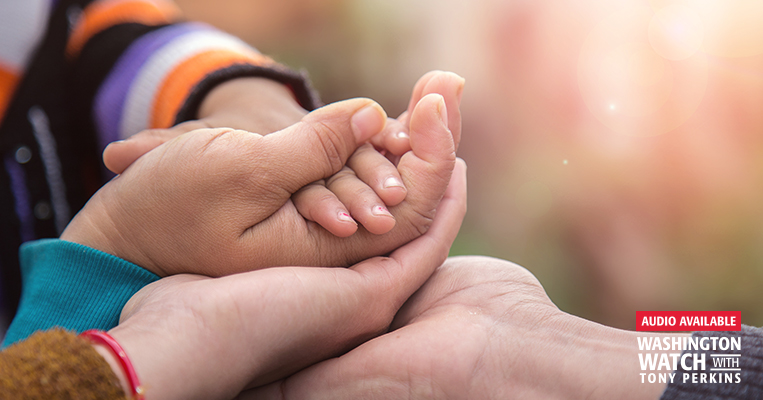 It's hard enough to get the truth out on a level playing field -- but in today's news, it's downright impossible. The Left has disinformation down to a science, especially when it comes to LGBT issues. That's dangerous in any situation -- but on the president's new adoption rule, it could mean the difference between a child finding a home and growing up without any love at all.

Last Friday should have been a good day for everyone -- a good day for children, a good day for adopted parents, and a good day for religious freedom in America. Instead, the liberal media took the administration's decision to open up the adoption process to anyone and turned it into another moment of fake martyrdom for the Left.

As usual, the problem goes back to Barack Obama and his pattern of strong-arming Christians into surrendering their beliefs. In more and more states and big cities, liberals were following that lead in the adoption debate, ordering faith-based agencies to place kids with same-sex couples or shut down. Enter the Trump administration, who saw the damage this was doing to the country -- and children in particular. Suddenly, major networks like Catholic Charities, who did the bulk of adoption matching, were closing their doors in hostile areas. So last week, HHS issued a rule that makes it clear the federal government can't force religious groups to choose between their faith and serving communities.

Of course, the Left went ballistic -- screaming that President Trump was banning gay adoption. Governor Andrew Cuomo (D-N.Y.) went even further, vowing to sue the administration over a policy that he called "heartless," "dumb," and "repugnant to our values." "Our message to the Trump administration is simple: there is no place for hate in New York or in our nation, and we will not allow this noxious proposal to stop LGBTQ New Yorkers from becoming parents or providing care to children in need."

Congressman Mike Kelly (R-Pa.) could only shake his head. "The truth eludes these [extremists] anytime they talk! ...But they say these things -- and I think they say them long enough and loud enough that they [hope] people will just start to take it as truth... But they'll do whatever they need to do to get [whatever they want] -- lie, cheat, steal, whatever. In this case, these are such false statements. In fact, our piece of legislation is called the Inclusion Act." All we've ever asked, he explained, is that when it comes to faith-based communities -- the ones who've been the most involved in adoption and foster care throughout history -- that they aren't excluded.

Absolutely nothing in the Trump rule or the Inclusion Act, Rep. Kelly's bill in Congress, would make it harder for anyone to adopt -- including same-sex couples! "Don't get confused about what's taking place here..." Kelly warned. "This is about children, and this is about putting children with loving families... And we -- the faith-based community -- were getting excluded."

The far-Left had this idea that if they could shut off the flow of federal dollars to these groups, they could force them to accept a liberal approach to adoption. "Our feeling is always: let's make it all inclusive," Rep. Kelly explained. "Let's let adoptive families and foster care families decide where it is that they want to go -- and not have these agencies shut down because somebody says, 'Unless you do it our way, we're not going to allow you to participate.' And that's exactly what's happened."

But, as another court points out, it's Cuomo's approach that's unconstitutional -- not Trump's. Just this week in Syracuse, the 2nd Circuit Court of Appeals issued an emergency order to keep New York officials from threatening a faith-based agency called New Hope Family Services. Alliance Defending Freedom attorney Roger Brooks was relieved, at least for the moment. "New Hope's faith-based services do nothing to interfere with other adoption providers, but banishing it means fewer kids will find permanent homes, fewer adoptive parents will ever welcome their new child, and fewer birth parents will enjoy the exceptional support that New Hope has offered for decades."

Liberals can bully a lot of people -- but thank goodness the president isn't one of them. "There has never been an administration that's kept its word more than the Trump administration," Rep. Kelly told listeners on "Washington Watch." "And I think that the faith-based community needs to realize -- other presidents have made other promises, but never follow through. Well, this president has followed through on everything he said he was going to do, especially when it comes to religious freedom."

Trump Sees Red in the Bluegrass