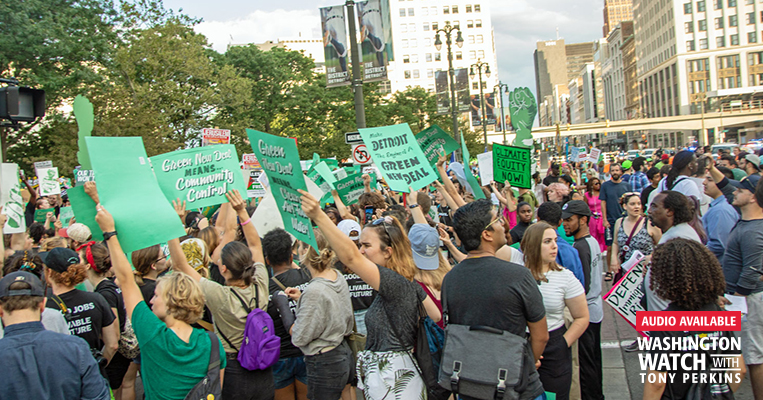 Donald Trump is more committed than anyone to cleaning up the environment -- at least the one Barack Obama left behind. Mopping up an eight-year mess is no easy task, but the new president kept at it on Monday, starting the process to pull America out of a dollar-sucking, job-crushing climate treaty that wouldn't have made a degree's worth of difference in the earth's temperature!

What it would have done is put 2.7 million people out of work by 2025, costing the U.S. some $3 trillion in "lost economic output." And for what? A manufactured "crisis" that crumbles under the weight of real-world evidence. With liberal theories on thinner ice than most polar bears, the president said he couldn't support a deal that punishes the United States. And while the treaty "was designed to make it difficult for countries to leave the deal once it was ratified," the Wall Street Journal explains, that didn't deter Trump. The minute the three-year opt-out kicked in, the administration set the wheels in motion -- keeping another promise and outraging the radical Left.

But as far as environmentalists are concerned, it's not just the climate we should control -- but people. On the heels of America's withdrawal from the Paris accord, thousands of "experts" released a letter calling for something more extreme. "We declare, with more than 11,000 scientist signatories from around the world, clearly and unequivocally that planet Earth is facing a climate emergency." And how do they intend to deal with it? The simple answer: population control. The number of humans on our planet "must be stabilized -- and, ideally, gradually reduced -- within a framework that ensures social integrity."

Now, nothing about the call of population control is new. Environmental extremists have been carrying that banner for years. The only difference now is that the Democratic Party is embracing it. Just this past September, Senator Bernie Sanders (I-Vt.) shocked people with the suggestion that third-world women should abort more babies -- and the U.S. should fund it. "The Mexico City agreement, which denies American aid to those organizations around the world that allow women to have abortions, or even get involved in birth control, to me is totally absurd. So I think especially in poor countries around the world... where they can have the opportunity... to limit the number of kids they have -- [is] something I very, very strongly support," he said.

Former U.N. ambassador Nikki Haley seized on that in a recent email, pointing out that "liberals continue going around the country touting their radical climate change agenda." Front and center, she said, is the Green New Deal, which goes so far as to "promot[e] abortion in third world countries to control the population!" PolitiFact took issue with the suggestion, slamming Haley's claim as "Mostly False." That's quite a leap from PolitiFact, considering that even the person behind the policy, Rep. Alexandria Ocasio-Cortez (D-N.Y.), was pretty clear that the last thing America needs is more children. "There's scientific consensus," Ocasio-Cortez argued, "that the lives of children are going to be very difficult. And it does lead, I think, young people to have a legitimate question, you know, is it okay to still have children?"

Abortion has been a mainstay of the Left's "family planning" agenda for decades. It's hardly a secret, especially when taxpayers are funding groups like Planned Parenthood to the tune of a half-billion dollars a year. The only thing that's "Mostly False" is the need for any population control at all.

As Christians, the idea that we should ignore God's command to "be fruitful and multiply" is a direct contradiction of Scripture. FRC's David Closson, on Wednesday's "Washington Watch," warns that this whole mentality of "children as consumers" -- not as blessings -- is a repudiation of the Christian worldview. As believers, we don't need to fear what might happen to the earth, while we are to be good stewards, we can no more save the planet than we can save ourselves. And historically, these calls for population control have been rooted in predictions that never came to pass. Paul Ehrlich's book, The Population Bomb, predicted millions of people would die of starvation in the 1970s and 80s. That hysteria actually paved the way for the creation of the U.N. Population Fund -- which was used to promote things like the one-child policy in China.

Virtually nothing Ehrlich wrote came to pass. So I would ask those who are calling for population control because there is a climate crisis on the horizon, aren't you concerned about being on the wrong side of history here? Because most of these claims have been proven false over time. As Christians, the only way to be safe is standing on the side of God and what He says about children and the earth we inhabit. Nothing else matters.

Legends of the Fault in Kentucky
NEXT