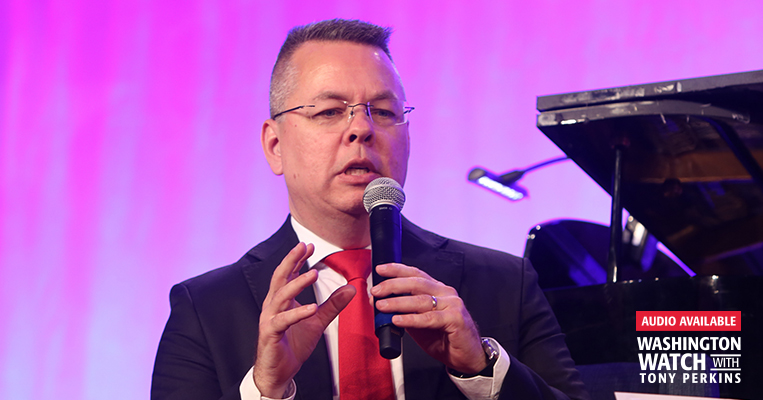 “Lean Into God”: A Pastor's Prayer for the Persecuted Church

Pastor Andrew Brunson spent two years locked inside a Turkish prison, falsely accused of being a spy. His true “crime” was spreading the gospel of Jesus Christ in one of the largest unevangelized countries in the world. It was a brutal ordeal that we Westerners can scarcely imagine going through ourselves as we enjoy the material comforts and religious freedom that only a fraction of the world’s population shares.

But to hear Pastor Brunson tell it, he was actually blessed during his 735-day torment by the sustaining knowledge that a multitude of believers were praying for him, something that many other prisoners of conscience do not enjoy. As he told me yesterday on “Washington Watch,” “I know that many who are suffering for Jesus in prison are often alone. They are often believers who have come over from a different religion, often from a Muslim background, and many of them have been rejected by their families. It’s so important to be supporting them in prayer.”

Prayer is real. Just as Pastor Brunson was sustained by the “worldwide prayer movement that poured into Turkey,” as he describes it, so too are we believers called to pour prayer into all the places in the world where our fellow believers are being persecuted for their faith. This Sunday, November 3rd is the International Day of Prayer for the Persecuted Church, a perfect opportunity for our churches to become bastions of prayer for the estimated 245 million Christians in the world who are harassed, imprisoned, tortured, and killed for simply believing they have a Creator and Savior.

As Pastor Brunson describes in his new book God’s Hostage: A True Story of Persecution, Imprisonment, and Perseverance, when we turn to God at our most desperate hour, He does the miraculous.

“I was really broken in prison by the conditions,” Pastor Brunson told me on radio. “I turned to God in desperation, and he began to rebuild me in the second year [of imprisonment].”

But it was by no means an easy process. “I thought, ‘I don’t measure up.’ I told my wife Norine so many times, ‘God chose the wrong man for this.’ I just don’t measure up to the people who have gone through these things before. And over time, I came to think, well, I think God chose the right man because he wanted a weak man who could then be an encouragement to other people who are weak.”

He went on: “Many people who I have heard since getting out of prison, I thought it was unique to me, this weakness and brokenness, but many people who have been in prison for Jesus—most of them are non-Westerners—they have said that they have an experience similar to mine where there are rays of light—things that God does that encourages them. But for the most part, they experience sometimes the silence of God and that feeling of abandonment. He doesn’t abandon, but we sometimes feel that way, and we need to learn to stand in the darkness and lean into God even when we don’t feel him.”

This is a profound lesson for all of us, and it gives great hope to those all over the world who are being persecuted for their faith: that when we lean into God during our most difficult trials and when we are feeling our weakest, God always responds.

“I found that God allows his children to be tested,” Pastor Brunson told me. “When we go into the valley of testing, we can feel very alone and despondent. I found that as I focused on him and decided to lean into him, I made a decision with my will, not with my feelings, but with my will to say, ‘whatever you do or don’t do, God, I am going to follow you.’ And as I did that, he met me at that point of weakness.”

To watch videos and download resources for International Day of Prayer for the Persecuted Church, visit rememberthepersecuted.org.

The Miseducation of America's Youth
NEXT

Changed by Love: The Untold Stories