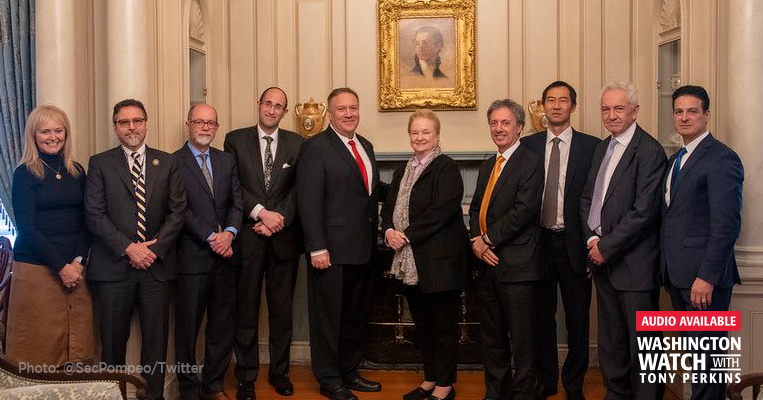 "Human rights" is a popular term. No one really thinks it's a bad thing. That's why even North Korea and China try to justify their behavior in terms of human rights. If one can claim this mantle, they are nearly unassailable.

Hence the many groups and international organizations trying to cloak their policy and advocacy goals in terms of human rights. Likewise, if they can frame their policy goals in this way, they've claimed the moral high ground. For decades, they've been successful in doing so. But this doesn't mean they are correct.

The genesis of human rights goes back centuries, and is uniquely religious -- and Christian -- in origin. Indeed, how can the notion of rights that belong to all human beings and bind all governments have legitimacy except through appeal to a higher authority?

Reforming and re-grounding such rights is exactly what Secretary Pompeo and the Trump administration's State Department hope to accomplish through the Commission on Unalienable Rights -- which held its first public hearing yesterday.

As Secretary Pompeo observed when appearing with me Wednesday on Washington Watch, "what we're hoping to do is to take this idea of rights, which sometimes becomes confusing or turns into simply personal or political preferences, and reground it -- reground it in the history and tradition of the United States so that we are moored to something more than someone's fancy of the moment and we come to understand that these incredible cherished, fundamental rights are at the very core of the American experience."

This will be driven by a "set of commissioners from a broad political perspective, different faith traditions, all aimed at something that I think every American can agree to, which is our conception that our founders put in place of the protection of human life and dignity is central to America's wellbeing and our exceptionalism as a nation, and indeed, are a beacon for the entire world."

As the secretary observed, when Venezuela is appointed to a seat on the U.N. Human Rights Commission, you know there are problems with our practice of human rights.

There has indeed been a perversion of the word "right" for nefarious means, using it like silly putty, stretching it and distorting it to use for things that it was never intended to be used for. According to Secretary Pompeo, "this has at least two outcomes that are bad. One is that you'll end up with people asserting rights that we all know are fundamentally at odds with the most fundamental ideas that come out of not just Christianity but all the Abrahamic faiths, but that's the first problem. The second one is that when other rights are added into the mix, when you use the word "right" for something that is a mere preference, then there's focus and attention and energy applied to preserving and protecting that thing called a right, and that comes almost necessarily at the expense of the fundamental rights. If you're enforcing and protecting everything all the time, you lose sight of the focus and the things which are truly central to human dignity: the capacity for individuals to express their own conscience, and the things that you and I and I think nearly every American has come to understand as those rights which are most fundamental, just simply as a result of our humanness."

A Month of Impeachment Secrecy