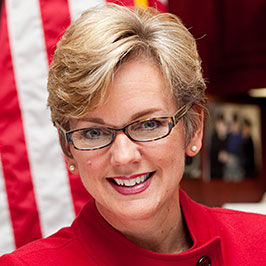 Originally from Canada, Granholm served two terms as the governor of Michigan, where she developed knowledge of the nation’s auto industry. Prior to her election, she served as the Attorney General of Michigan for one term. Throughout her career she has advocated strongly for anti-life and anti-family policies. Granholm was confirmed as the Secretary of Energy on February 25, 2021 by a vote of 64-35.