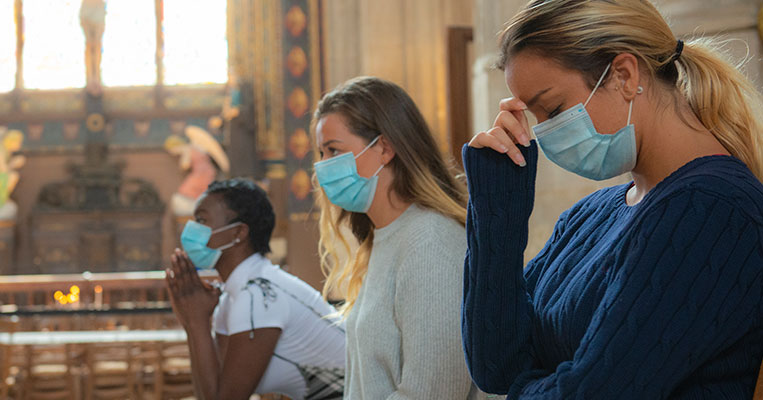 Supreme Court Affirms the Freedom of Houses of Worship

The disruption wrought by the coronavirus pandemic has affected nearly every aspect of American life including school, work, entertainment, and even worship. While many leaders have tried to address concerns over public health while maintaining civil liberty, some overzealous authorities have exploited the pandemic by unfairly discriminating against churches. However, a series of recent decisions from the Supreme Court suggest the tide is finally turning in the fight to preserve religious freedom in America.

Following the outbreak of the coronavirus in the spring, 99 percent of churches ceased in-person gatherings. However, as the pandemic wore on and as many states relaxed restrictions, churches around the country were held to a different standard. While abortion facilities, tattoo parlors, and liquor stores could re-open, many states insisted that churches remain shuttered.

Eventually, as churches in certain parts of the country continued to face unfair treatment, many went to court seeking relief. One case, Calvary Chapel v. Steve Sisolak, went to the Supreme Court. The case dealt with Nevada Governor Steve Sisolak's Directive 021 which outlined COVID regulations for social activity. In particular, the directive restricted casino capacity to 50 percent of the fire code cap. Notably, however, churches were limited to a 50-person limit (regardless of fire code capacity). Over vigorous dissents from Justices Alito and Gorsuch, the Supreme Court, in a 5-4 decision, ruled against the church and in favor of governor's restrictions.

However, the outlook for churches changed dramatically in October with the elevation of Justice Amy Coney Barrett to the Supreme Court. In fact, in one of her first cases, Roman Catholic Diocese of Brooklyn v. Cuomo,the Supreme Court heard a case from New York churches and synagogues challenging the constitutionality of Governor Andrew Cuomo's restrictions on religious gatherings. In a 5-4 decision, the court ruled in favor of the churches, finding that the governor's orders violated the rights of New York City's churches and religious groups.

In his concurrence, Justice Gorsuch noted, "[E]ven if the Constitution has taken a holiday during this pandemic, it cannot become a sabbatical." Issued the day before Thanksgiving, the decision in Roman Catholic Diocese of Brooklyn v. Cuomo is already having a ripple effect on similar cases around the country.

For example, on December 3, the Supreme Court instructed the Ninth Circuit to revisit its decision against Harvest Rock Church. The church had contested Governor Gavin Newsom's ban on indoor singing and had been denied a preliminary injunction in July against the governor's statewide orders that limited gatherings including worship services.

On Tuesday, the Supreme Court issued similar orders in other cases. First, the court ruled in favor of a church in Colorado that opposed state-imposed capacity on worship limits. The case concerned High Plains Harvest Church which was limited at 25 percent of their posted attendance or up to 50 people (whichever was smaller). The church objected to these arbitrary limits and sued in the fall. However, a circuit judge in August denied their request. On Tuesday, the Supreme Court instructed, in a 6-3 decision, the circuit judge to reconsider the case in light of the recent decision in New York.

Furthermore, along with the Colorado case, the Supreme Court granted relief to a church and synagogue in New Jersey. In this case, Reverend Kevin Robinson and Rabbi Yisrael A. Knopfler had filed a suit against their governor, Phil Murphy. Robinson is pastor of Saint Anthony of Padua Church in North Caldwell, New Jersey, and Knopfler is a Rabbi of a synagogue in Lakewood, New Jersey. These church leaders objected to New Jersey's COVID regulations that limited houses of worship capacity to 25 percent or 150 individuals (whichever is less), while other social gatherings could take place with less stringent limitations. In fact, schools, some businesses, and even media centers can operate at 100 percent capacity. Like the Colorado case, the lower court (in this case the Third Circuit) must now reconsider the case in light of Roman Catholic Diocese of Brooklyn v. Cuomo.

Bringing things full-circle, and underscoring the impact Justice Amy Coney Barrett is having on the Supreme Court's protection of religious freedom, yesterday the Ninth Circuit issued a unanimous ruling granting relief to Calvary Chapel, the very same church the high court had ruled against earlier this year before Barrett was seated. The Ninth Circuit's reasoning was that the Supreme Court decision in Roman Catholic Diocese of Brooklyn (which Barrett helped decide 5-4) "compels the result in this case."

While there is great optimism about the new vaccines and hope that the pandemic will soon be under control, it is important to safeguard America's liberties. These recent decisions by the Supreme Court to protect the First Amendment rights of churches and religious groups is a welcome sign that the court is recognizing, in the words of Justice Gorsuch, that the Constitution does not take a sabbatical, and that the religious freedom of all Americans must be safeguarded.

Parents Are Voting Against Public Schools With their Children's Feet
NEXT

In China, Almost Half a Million Souls Are Being Forced to Pick Cotton