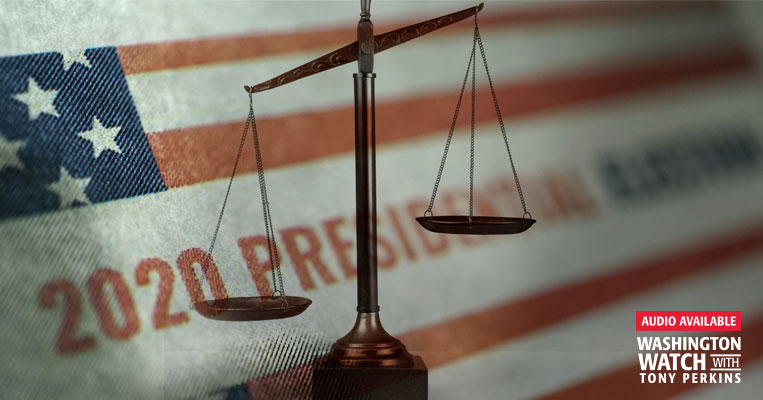 The Night the Rights Went out in Georgia

What Americans witnessed on November 3rd didn't just happen. A lot of people don't remember, but the seeds for this election mess were planted way back in 2018 when Democrats won the House. The coronavirus didn't hurt, of course, but the cheat was on long before Joe Biden was nominated. Why does that matter? Because -- the president's attorneys warn -- if Republicans don't keep fighting, the damage to our democracy is here to stay.

Liberals are getting restless. The media is impatient. Even some Republicans, men and women who believe there was legitimate fraud, want the White House to throw in the towel and move on. Why don't they? Because at the end of the day, this isn't about the presidential election. It's about the sanctity of American law. We aren't just talking about Pennsylvania's law or Georgia's law -- but the power of every state legislature to pass laws with the expectation that they will be upheld. Right now, elected leaders in state legislatures can't even perform their most basic function without other state officials and courts overruling them. That's not how democracy works. So when the Left tells everyone to "move on," they aren't pressuring us to give up on Donald Trump -- but our entire constitutional system.

Americans have laws for a reason, and when they're violated or ignored, it should concern everyone. Trump attorney Cleta Mitchell, who's had her eyes on the Left for two years, knows the game plan. As far as she's concerned, the 2020 election has been a coordinated sabotage since the earliest days of the new Congress. "Don't forget," she said on "Washington Watch," "H.R. 1 -- the first bill taken up by Nancy Pelosi when the Democrats won control of the House in 2018, was a massive election bill that would have provided for [this mail-in balloting] everywhere in the country." Of course, as usual, the Democrats couldn't accomplish any of their radical election plans democratically. So they started filing lawsuits to sue their way to an absentee system that would open up new avenues for manipulation. "Even in 2019," Cleta points out, "they started [suing]... in Mississippi, Louisiana, cases in practically every state... [They] spent literally hundreds of millions of dollars (it might not surprise you to learn that George Soros funded it, [and] Marc Elias [of Russia-gate fame] managed it."

The strategy was to get judges to "adopt laws -- quote unquote -- or orders that basically threw out the duly enacted laws of the state legislatures," Cleta explained. Then the coronavirus hit, and it was the perfect storm for the Left's stalking horse: rewriting election laws that would undermine the election safeguards and ballot integrity the states have in place. Even Georgia Secretary of State Brad Raffensperger (R), Cleta said, when he was sued by Stacey Abrams (D) capitulated. "Instead of fighting them, saying, 'I have no authority, and the judge has no authority to change the law -- that's the legislature's responsibility,' he ended up settling with them and entering a consent decree." And you and I both know, she shook her head, "what happens to Republican officeholders when they decide that they like to be loved by the media and the Left. It's not good for conservatives." And, as we've seen, it's not good for the process.

For the time being, there's at least a very compelling case in Georgia. When it comes to fraud, people keep asking, "Where's the evidence?" Well, as the Trump campaign said in its filing on Friday: here it is. Their court petition has more than 1,000 pages of sworn testimony and nearly 100 affidavits -- signed under penalty of perjury. "There's nothing in this lawsuit that is not backed up by either a sworn affidavit by an eyewitness as to a violation of a Georgia election code or a declaration by an expert who has analyzed the Georgia state election and voting records." It would be difficult for Raffensperger to read the petition and not understand that there are tens of thousands of illegal votes -- "more than enough [to make up the margin of victory] that should be thrown out," Cleta argues.

"That's what's so remarkable here..." Cleta went on. "Several of these violations -- just taken by themselves -- would be three to four times the number required to invalidate the election. [It's] all in there. So... I will guarantee that the secretary of state, the number one defendant, has not read the analysis of his own data." But whatever anyone says, she argued, "this election was not valid. Those results are not valid. And the secretary of state has a lot to answer for in my opinion."

Her concern, like a lot of voters, is that these issues need to be cleaned up before the Senate runoff elections. The courts and certain state officials helped the Left undermine election laws, and the legislature needs to assert itself to make sure that a) that doesn't happen again, and b) that it doesn't affect January 5th. When almost 40 percent of the country thinks November 3rd was a rigged election, the last thing Americans need is to have the Senate thrown into the same limbo.

Ninth Circuit on Casino Rule: No Dice
NEXT

In Kentucky, Some Schools are More Equal than Others