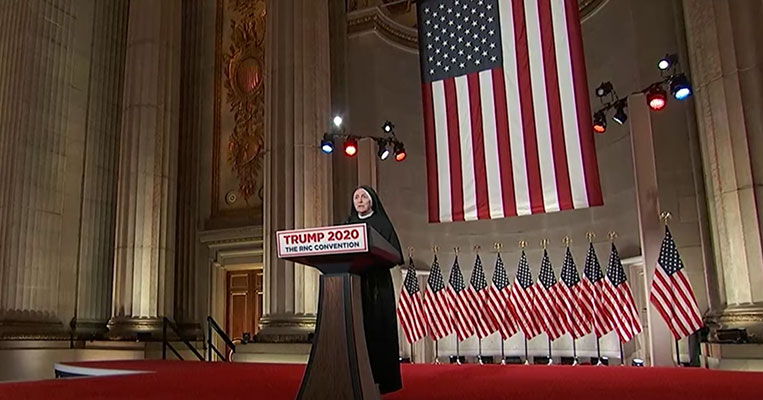 John Adams called them "stubborn things." He was talking about facts -- but he could just as easily have been talking about Democrats. In the last 72 hours, the party of Joe Biden and Kamala Harris have been dogged in their attempts to keep Americans from finding out the truth about where they stand. It's been one of the most fascinating aspects of RNC Convention week, as speaker after speaker pulls back the curtain on the Left's extremism -- only to have an army of phony "fact-checkers" refuse to own up to it. Apparently, the Democrats' only solution for their platform's unpopularity is to say the other side is lying about it.

Unfortunately for Joe Biden and company, public statements, videos, and records are stubborn things too. And they all point to a Democratic ticket that any honest journalist would agree is the most fanatical in history. Of course, the most elaborate cover-up has been on the life issue, which is more than a little ironic coming from the "Shout Your Abortion!" party. When Vice President Mike Pence shamed his predecessor for supporting "taxpayer funding of abortion right up until the moment of birth," NBC didn't just stop with calling that false -- but the entire notion of late-term abortion!

Jane Timm, writing for the outlet, fired back that "elective abortions do not occur 'up until the moment of birth,'" a lie so outrageous you have to wonder how the media manages even 13 percent credibility in this country. Believe it or not, 22 states -- almost half -- allow birth day abortion. And in seven of those, women don't need a reason. A pregnant mom at 39 weeks can literally walk into a willing clinic and ask for an abortion, no questions asked. This is what liberals mean when they talk about "codifying" Roe v. Wade. Democrats know better than anyone that the default effect of that ruling was making abortion legal through all nine months. The only reason there are any restrictions at all on late-term abortion is because certain states took it upon themselves to enact them.

NBC doesn't want to admit that because they know most Americans, including the self-professed "pro-choicers," actually hate the idea of unrestricted abortion. You certainly wouldn't find them celebrating it like they'd won the Super Bowl or imploring their governor to light up the Brooklyn Bridge to revel in it. Only eight percent of Americans think abortion should even be allowed in the third trimester. An even tinier sliver -- six percent -- side with the Democratic ticket on birth day abortion. It doesn't take a genius to understand why liberals spend all their time talking about how "rare" late-term abortions supposedly are. "Just 1.2 percent occur after 21 weeks of gestation," Timm insists (since one percent sounds better than "just" 5,597 babies a year).

It would be one thing if Democrats stopped there. But amazingly, abortion at the moment of birth isn't the only thing the party wants. Based on their voting record, they want "abortion" after birth too. Americans saw this for themselves with gut-wrenching clarity, when Joe Biden's running mate, Kamala Harris (D-Calif.), was one of those 44 senators who marched to the floor and endorsed infanticide as a legitimate form of health care -- not once, but twice. Now, six months later, the mainstream media wants to pretend none of this ever happened. But if abortion is "moral," -- nay, "sacred" as Nancy Pelosi said -- why the sudden self-consciousness?

It all boils down to one thing: the Democrats' radicalism brings in the bucks -- but not the ballots. Voters couldn't be more turned off by ideas like tearing down the only wall between taxpayers and the abortion industry in the Hyde amendment. Or by the plan to pack the courts with Roe ideologues. Imagine how repulsed they'd be to know that the woman campaigning for America's second most powerful job is on record fighting to let newborns die. Or that the man who wants to lead the free world would never "second-guess" China's one-child policy.

To suggest that Biden is somehow more moderate than the rest of his party -- and the Washington Post tried -- is just semantics. As Alexandria Desanctis points out, "Biden has failed to articulate a single abortion restriction that he supports, which, in conjunction with his opposition to the Hyde amendment, makes him a supporter of taxpayer-funded abortion on demand until birth, just as Pence argued." When someone asked Joe Biden about his mixed record on abortion at the Planned Parenthood candidate forum, Joe himself said, "I'm not sure about the mixed part."

These are the places the Left is vulnerable, and they know it. When Sister Dede Bryne stands in front of the cameras and says, "President Trump will stand up against Biden-Harris, who are the most anti-life presidential ticket ever," people notice. When Lou Holtz, the famous Notre Dame coach explains that the reason Donald Trump has his trust is because "nobody has been a stronger advocate for the unborn," Americans pay attention. Because if you can't get the most basic issue of humanity right, what can you?

For more from the Republican National Convention and the GOP's chances on retaking Congress, don't miss my conversation with House Minority Leader Kevin McCarthy (R-Calif.).

Marxism Matters: The Real Agenda of BLM
NEXT