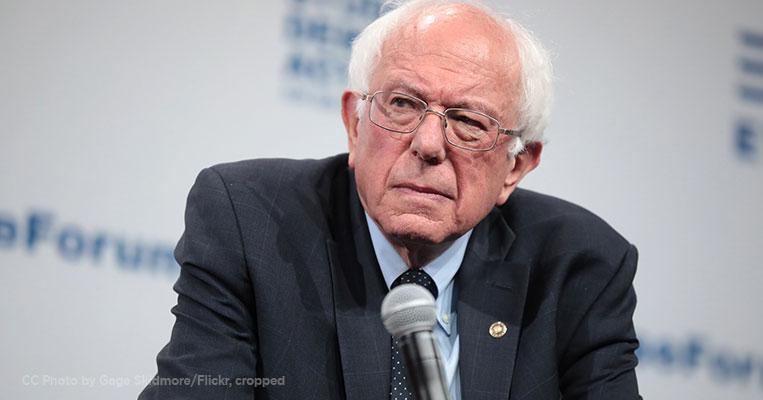 Weakened at Bernie's Plan for Abortion

Like a lot of readers, Alexandra DeSanctis almost choked on her morning coffee when she saw it. Senator Bernie Sanders (I-Vt.) -- a "family values" candidate? Was the New York Times joking? Apparently, not. Elizabeth Bruenig, one of the paper's writers, is a firm believer that Sanders could win if we all just focused on how much he cares about parents and kids. He's a "family values candidate in disguise," she insists. Well, the disguise must be a good one, because based on his latest abortion plan, there won't be many children left to care about.

Sure, Sanders took a few steps back on Super Tuesday, but America's favorite socialist is still a threat. If the senator wants to hang around, Bruenig argues, it's time for his campaign to set its sights "on the kinds of voters who turned out for Mr. Biden on Tuesday night -- anxious suburbanites wearied by the tumult of the Trump years." She ticks off all the ways that Bernie ought to appeal to the Democratic "normie:" his universal child care plan, his parental leave program. "Go to the voting booth for Mr. Sanders," she urges, "because he wants all kids -- your kids, my kids -- to be safe and happy. He wants to give all parents time to nurse, cuddle, and bond with their newborns without sinking into debt or poverty."

That all sounds great, until you look at how Sanders actually votes on children. If they're wanted, yes -- maybe he'll find a place for them in his pre-K indoctrination program. If they're not, then he's quite content letting them die before, or even after, they're born. Remember, infanticide, as far as Bernie and 43 other senators are concerned, is just another form of abortion. So when Bruenig says he wants to give "all parents time to nurse, cuddle, and bond with their newborns," she means it like Governor Ralph Northam (D-Va.) meant it. "The infant would be delivered. The infant would be kept comfortable. The infant would be resuscitated if that's what the mother and the family desired..."

Bernie Sanders isn't just an extremist on abortion. He's a proven extremist. "Back when some Democratic politicians still considered themselves pro-life or voted in favor of abortion restrictions or conscience protections for pro-lifers," Alexandra points out, "there was Sanders -- standing staunchly in favor of abortion on demand, at any stage of pregnancy, for any reason, funded by taxpayers."

Now even those views seem tame compared to what else the Vermont senator is suggesting. His "Reproductive Health Care and Justice for All" plan is about as fanatical as it gets -- and that's counting Senator Cory Booker's (D-N.J.) White House office of abortion. Bernie wouldn't just blow the limits off abortion (limits the majority of Americans on both sides support), he'd also export abortion (on your dime), boost Planned Parenthood funding, strip away every religious exemption to performing abortion or paying for it, punish anyone who won't participate in it, defund pregnancy care centers, make dangerous forms of birth control available over the counter, and ban abstinence education.

But wait, there's more. Sanders, like every other Democrat running for president, wants to codify Roe v. Wade. Now, some people might not be familiar with the term. By "codifying" Roe, Democrats mean making it permanent law. Why is that important? Because despite being around 47 years, Roe v. Wade isn't a federal statute. It's still just a court decision that can be overturned. So when liberals start beating the drum on "codifying Roe," what they're really saying is abortion's in jeopardy. (Now more than ever, thanks to Donald Trump's two originalist justices.) Which leads Bernie to his next point: litmus tests on Supreme Court nominees. As president, he promises to "require all judicial nominees to support Roe v. Wade as settled law.

As his website says, "Bernie believes abortion is a constitutional right, period." If that makes him a "family values" candidate, then I'd hate to see what a real liberal looks like!

Coping with Coronavirus: How Should Christians Respond?
NEXT