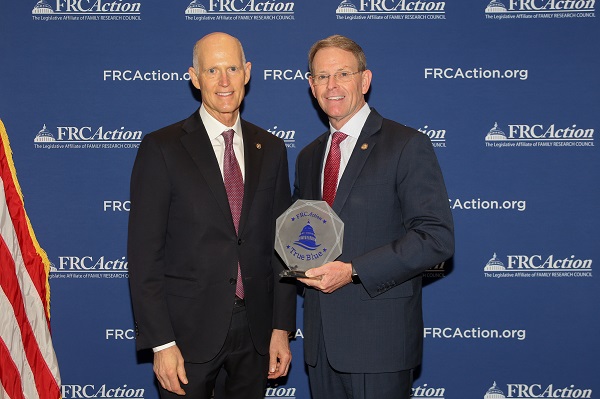 WASHINGTON, D.C. -- Family Research Council Action (FRC Action) recently released its annual scorecards announcing “True Blue” award winners for the Second Session of the 116th Congress and the First Session of the 117th Congress. Sen. Rick Scott is among the 58 members of Congress who scored a perfect 100 percent for votes cast in both 2020 and 2021. Recently, FRC Action awarded him with two “True Blue” awards for displaying unwavering commitment to and support of faith, family, and freedom.

“We thank Sen. Scott for defending faith, family, and freedom. He has voted to reject the radical gender ideology that would overhaul our federal civil rights framework to mandate special privileges for sexual orientation and gender identity. He voted to protect women, the military, homeless shelters, and public restrooms from this harmful ideology. He has voted to protect the sanctity of human life for unborn babies, end taxpayer funding of abortion, and prevent additional taxpayer funding of abortion both domestically and overseas. He also voted to expand protections for conscience rights, reject the increasing acceptance of marijuana use, and reject pro-abortion, anti-family, judicial and executive appointments.

“Floridians should be encouraged to know that they have a champion like Sen. Scott in Congress who, despite relentless attacks from the Left and the media, is standing strong for faith, family, and freedom,” concluded Perkins.